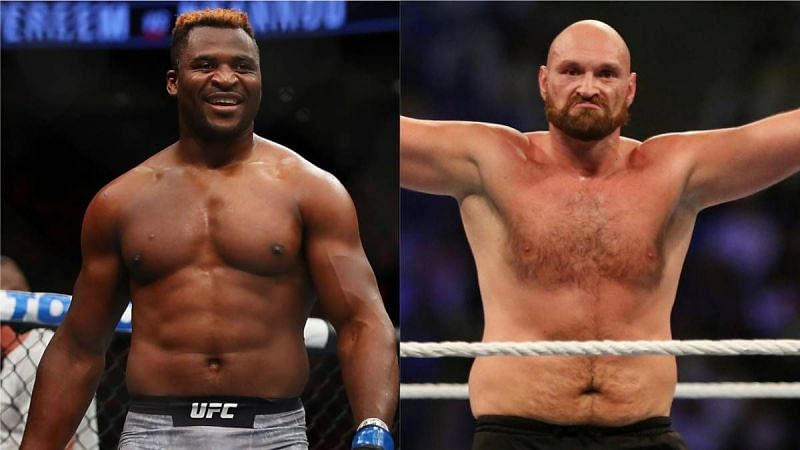 Francis Ngannou went on record to announce that there is at best a seventy percent possibility that he will go head toe-to-toe against Tyson Fury next year. Ngannou made the announcement while recovering from an operation intended to repair a torn medial collateral ligament as well as an injured anterior cruciate ligament injury on his knee.

The UFC heavyweight champion has continually spoken about his longing to fight Fury in a prize fighting match by continuously calling out the Gypsy King.

They 35-year-old boxer had recently made a trip to London to watch Fury fight against Dillian Whyte at Wembley Stadium. 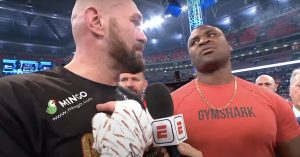 The 33-year-old Gypsy King was triumphant in the fight, thus solidifying his position amid the heavyweight greats of boxing. In the last fight, Fury viciously bowled over Whyte with a brutal blow to the jaw in their domestic dust-up.

Following the fight, Ngannou joined Fury in the ring where they spoke about the possibility of a ‘hybrid’ fight by using MMA gloves.

During an interview on “The MMA Hour” podcast, Fury spoke about their shared approbation for one another.

“We both want this fight, that’s clear, and we respect each other. Probably next year it will happen. I think it’s going to happen, it’s just a matter of our promotions, but we will sort this out at some point,” he was quoted as saying.

Yet, Ngannou is of the opinion that there will have to be firm rules set up all in the spirit of fair-mindedness.

“Make it a hybrid fight, something that makes it a little uncomfortable for him as a boxer.

Ideas like MMA gloves or fighting barefoot. I don’t know, we still have to figure this out.

I would say there’s a 70% chance my next opponent is Tyson Fury. On his side, I would say 90% against me,” Ngannou said.

Something to consider is that the possibility of such a clash will all completely be contingent on whether an agreement can be made between the two opposing sides, sinceTop Rank CEO Bob Arum and UFC president Dana White do not see eye to eye.

Arum, expressed that it would be ‘easy’ to arrange a fight between Fury and Ngannou seeing that both Top Rank and the UFC have broadcasting contracts with ESPN.

“I don’t know what (Ngannou) contract situation with the UFC is. Obviously, it’d be a massive fight, and it should be easy to make,” Arum said.

When looking at the outcomes of a fight between the two, it would be quite tricky to pin-point a certain victor.

Ngannou is known to be one of the UFC’s devotees for more than a few years since 2015. Subsequent to six fights with minor promotions, Ngannous won his initial six fights with the company before being defeated by Stipe Miocic in a championship bid at UFC 220 in January 2018.

He secured a rematch with Miocic at UFC 260 in March 2021 and stopped him in two rounds.

Fury has the innate capability to test himself in Ngannou’s discipline. Fury had earlier been seen exercising in the octagon with UFC middleweight Darren Till. Footage obtained pictured him focusing on using his knees and elbows while using mixed martial arts gloves.

Previous article
Dana White has no interest in Fury vs Ngannou: ‘F**king waste of time, energy, and money’
Next article
Sean O’Malley vs Pedro Munhoz set for UFC 276 in July