UFC heavyweight champion of the world Francis Ngannou will take on former title challenger and opponent Derrick Lewis in his first title defense.

The news was confirmed by UFC president Dana White. This means the UFC has moved away from offering the former light heavyweight champion Jon Jones a title shot.

In March, when Francis Ngannou knocked out Stipe Miocic in the second round, most fans assumed that it was Jon Jones who was going to fight Ngannou next, but the talks between Jones and the UFC went awry

As per Dana White, Jon Jones was demanding $30 Million to take on Francis Ngannou. Jones quickly refuted these claims. Jon Jones is coming off of a decision win over Dominick Reyes at UFC 247 in February of 2020. Following his win, Jones dropped the light heavyweight title in a bid to move up in weight class to challenge for the heavyweight crown. 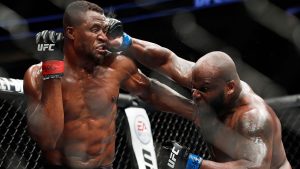 Jones hasn’t competed in nearly 14 months and he wants to be compensated for a super-fight with Ngannou, but neither the UFC nor Dana White is budging on the offer.

Dana White: Ngannou and Lewis are going to fight for the title

Dana White further added that Jones has a good relationship with Hunter Campbell and they are going to work things out with each other.

Per Dana White, Francis Ngannou vs. Derrick Lewis is being targeted for this summer.

Earlier today, he gave me an update on where the promotion stood with Jon Jones.

“Whether Jon has a manager or not, Jon is going to do what Jon wants to do.” White told TSN’s Aaron Bronsteter. “So it’s probably something that Jon Jones needs to workout with, you know I know that him and Hunter (Campbell) have a good relationship. So I think those guys are going to get together soon and talk.”

“Listen, you look as the last however many years and people ask me who I think the best ever is and I say Jon Jones. You know, Jon Jones is a massive part of the history of this company. He’s one of the best ever. No matter where you stand, whether you think it is him, Anderson, Khabib, GSP, wherever you stand on that, he’s one of the best of all-time. Obviously there is still some big fights that can be made with him and we would love to do it. You know, it’s not like we can’t get something done over here.”

“No, we are working on that fight. That fight (Lewis vs. Ngannou 2) is going to happen this summer.” (H/T – BJPenn.com)

The first fight between Francis Ngannou and Derrick Lewis was a barn burner and it will go down as one of the most boring heavyweight fights in UFC history.

In their fight at UFC 226, Only 33 total strikes were thrown in the three rounds. Ngannou threw 11 and Lewis threw 22.

Who do you guys think wins in a fight between Francis Ngannou and Derrick Lewis? Let us know in the comment section below.