Frankie Edgar has spent his whole career being the smaller guy in the Octagon. Even though he was a former lightweight champion, he had made a career out of beating bigger men. Despite dropping down to featherweight division, he is still considered small for that weight class.

Although Frankie Edgar has had terrific success at featherweight, there always was a curiosity to if he would drop down to the bantamweight division. 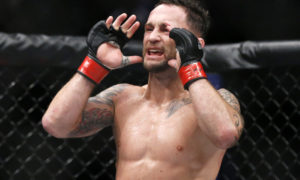 Edgar was supposed to fight Korean Zombie at UFC Denver, but he had to pull out due to injury. The New Jersey native says that not draining down to make weight has added longevity to his fighting career.

“If you can make the weight and you can perform, all the power to you,” Edgar said in a recent interview with MMANYTT’s Damon Martin. “That’s how this sport is set up. I’m not knocking anybody for that but if I wanted to be the best dieter, I’d f–king be a jockey,” Edgar said with a laugh. “I’m a little dude and I’ve always been a little dude and I think I like being the little guy in there battling the big dudes.

“I like to show that hard work and technique can overcome anything.”

Although he admitted that he hasn’t completely ruled out moving down to the bantamweight division.

“I just don’t feel I need to,” he said. “Could I? I probably could and maybe if an opportunity arose, maybe I would but I don’t feel the need for it.”

Do you guys want to see Frankie fight at bantamweight division?