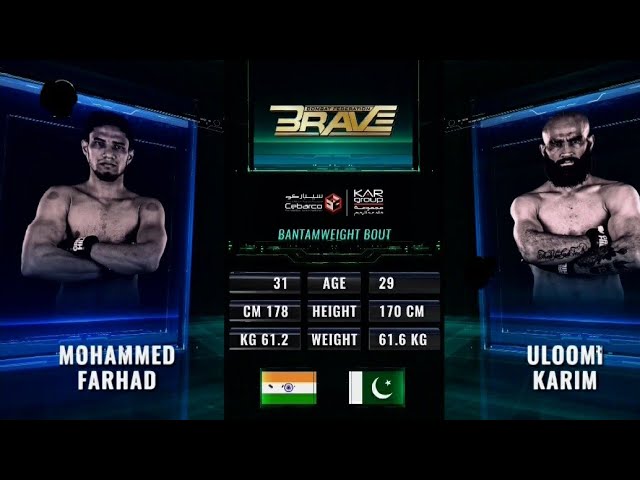 Mohammed Farhad defeated Uloomi Karim via a brutal first-round KO in the second round of BRAVE CF 47.

ROUND 1: Both fighters touch gloves to start the round. Farhad catches Karim with straight right hand and then misses the Pakistani’s head with a head kick. Farhad is maintaining the distance and now Karim lands an overhand right. Farhad lands a right hand and makes Karim miss a left hand.

Karim shoots for the takedown and forces Farhad towards the cage and so far the Mumbaikar has shown excellent takedown defense. Farhad lands a leg kick and right hand missed for Karim.

OHHHH! Mohammed Farhad lands a hard right hand that dropped Karim and Farhad is landing hard punches on Karim. But Karim recovers well and scores a takedown and then lands couple of elbows. And now Karim wobbles Farhad at the end and he finishes strong. A good opening round, but Farhad takes it on my cards.

ROUND 2: Uloomi Karim starts the round strong and he lands couple of hard punches that wobbles Farhad. He then scores a takedown, but Farhad quickly gets back on his feet and Karim lands a hard right hand. 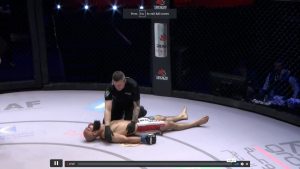 A knockout artist with an extensive striking background, Mohammed Farhad improved his professional record of 12 wins and only three LOSSES. All of his four wins under BRAVE Combat Federation’s banner came by way of knockout or technical knockout.

Prior to beating Karim, Mohammed Farhad stepped into the BRAVE CF Arena back in 2019 where he beat Kushal Vyas via first-round TKO in his home country of India, back in November of 2019. Mohammed Farhad was scheduled to fight in 2020, but it never came to fruition.