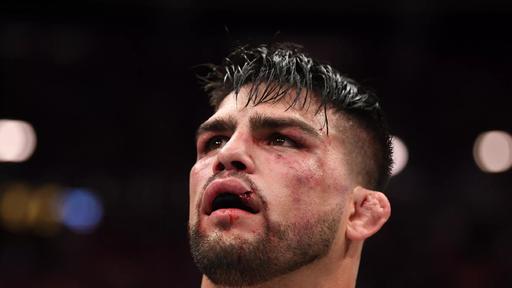 Kelvin Gastelum was asked to name the hardest puncher he’s fought to date by a fan on Twitter and pointed to Adesanya, who remains the only fighter to drop him in the cage.

On April 14, 2019, Kelvin Gastelum lost to Israel Adesanya via unanimous decision at UFC 236. The loss deprived Gastelum of the interim middleweight championship but the fight was hailed as one of the greatest title fights in UFC history. Though he lost via unanimous decision, he came very close to get the win against Adesanya who only clinched it at the very last round of the title fight.

The only person that has dropped me has been Izzy. So him. https://t.co/iH80OASapG

While he takes some fulfilment from his performance that night, Gastelum admits it still hurts to think how close he was to wrapping gold around his waist. The following comments were made by Kevin, after his loss:

“I’m not really worried about it right now, but when people ask me, and they’re like, ‘You were this close,’ it sucks. It burns in my soul. It burns in my heart to know I was that close, and I just won’t let it happen again.”

This match was the beginning of a downward spiral in Kevin’s career. Gastelum’s losing streak began after his war with reigning middleweight champion, Israel Adesanya. After failing to capture interim gold, Gastelum took on Darren Till. Unfortunately, he lost a close battle to Till. He was then suspended for nine months as he tested positive for THC. However, the suspension was later reduced to five months.

Desperate to get back in the win column, Kevin (#7) took on #6 ranked fighter, Jack Hermansson. Unlike his previous two bouts, this fight was not even close. Right off the bat, Hermansson began targeting Gastelum’s legs. And before we knew it, “The Joker” got a hold of Gastelum.

Meanwhile, Adesanya, unbeaten at 19-0, seeks his second straight title defense after outpointing Yoel Romero at UFC 248 in March. His list of conquests also includes Robert Whittaker, Kelvin Gastelum, and Anderson Silva, and he looks to become the first man to defeat Costa.

At 13-0, Costa has emerged as the next man up at 185 pounds. He owns 11 career knockouts including four in the UFC. The beef between he and Adesanya has steadily grown as fight night approaches.

Previous articleUFC News: Brian Ortega clears the air on Jay Park incident, says it was “just a slap”
Next articleDaniel Cormier predicts how Miocic vs Jones will play out