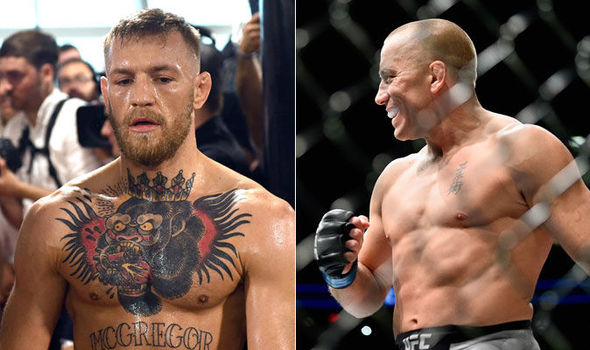 Former UFC middleweight and welterweight champion Georges St-Pierre was surprised by the way Conor McGregor lost in his last fight against Dustin Poirier at UFC 257. 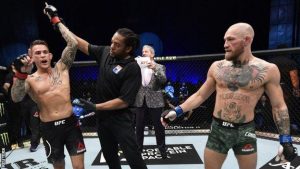 Speaking on Michael Bisping’s ‘Believe You Me’ podcast, Georges St-Pierre said that he was surprised by the result, as he was rooting for Conor McGregor to beat Dustin Poirier.

“I thought Conor was going to win, but I was wrong. I was very surprised. Will he keep his composure under the pressure? I think one of Conor’s biggest strengths is that he overwhelms his opponents with his pressure, with his presence,” Georges St-Pierre said to Michael Bisping on his podcast. “All the information he gives his opponent’s brain and the talking and all that, a lot of his opponents fold under pressure, but Poirier stayed sharp, and it was a real testament of how good he is. It was amazing. Now it will be really interesting to see how Conor comes back from it. I believe he can come back from that loss. He’s the kind of fighter who fuels him on confidence. That is how he performs at his best.”

Georges St-Pierre gave advice to Conor McGregor. He said that the Irishmen needed to be reborn and learn from his past mistakes.

“I think he needs to be reborn. He needs to change things in his training and in his life that he believes were the causes for his failure. It doesn’t matter if it’s true or not as long as he believes,” St-Pierre said. “So in my case, when I lost to Matt Serra, I trained myself to believe that I lost to Matt Serra because I underestimated him. Maybe I wasn’t scared enough, maybe I didn’t put too much in training, that’s what I tried to force myself to believe. Maybe it’s not true,

“But the important part is that he believes in it so he can build on his confidence from it,” St-Pierre continued. “He needs to find what he thinks he did wrong in his previous preparation leading up to the fight, whether it’s his training leading up to his fight or whatever, and not make the same mistake twice.”

Do you guys agree with Georges St-Pierre? Let us know in the comments section below.

Previous articleGeorges St-Pierre opens up about the missed opportunity to fight Khabib Nurmagomedov
Next articleAdriano Moraes Vs. Demetrious Johnson To Headline ONE Championship’s 7 April Event