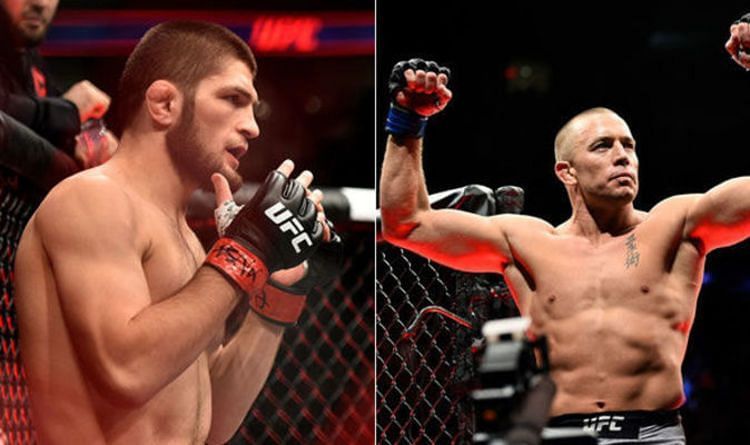 Khabib Nurmagomedov retired from the sport of Mixed Martial Arts back in October of 2019 following his second-round submission win over former interim champion Justin Gaethje in the main event of UFC 254. There have been talks about a fight between Georges St-Pierre and Khabib Nurmagomedov.

The Dagestani star has also expressed interest in fighting Canadian superstar for quite some time. His late father, Abdulmanap Nurmagomedov also wanted Khabib to eventually fight Georges St-Pierre and then retire from the sport. 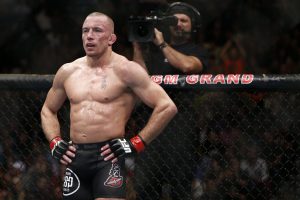 Georges St-Pierre recently appeared in Michael Bisping’s ‘Believe You Me‘ podcast and opened up about the superfight that never happened.

“I was in the same boat as everybody,” St-Pierre said (via MMA Fighting) “I thought maybe he would have called me out to maybe pressure the UFC to organize the fight.

“It doesn’t mean I would have accepted,” St-Pierre said. “Everybody says, ‘Oh, when is it going to happen?’ I never said I wanted to do it. It depends (on) the conditions too. I could think about it seriously if the conditions are right in terms of the weight class and all that, but there’s no way I’m gonna go down to 155 now. I’m 39 years old and this is out of the window…

“We’re both about the same size. I’m not gonna lie,” St-Pierre added. “I wake up in the morning and I’m about 183 pounds. I’m sure he’s about the same weight as me if not probably bigger. So I think the weight class — it’s like a novelty fight, a superfight — you need to stipulate the rule maybe no weight class or maybe (that) you cannot be more than three percent different in terms of weight. I don’t know but there’s ways to do it. You don’t have to cut weight and damage yourself to do something like that.”

How would a Georges St-Pierre vs Khabib Nurmagomedov fight go?

Georges St-Pierre also gave his thoughts on how his fight against Khabib Nurmagomedov go if they fought.

“If in a hypothetical world this fight would happen, I think I would need to use all my tools,” Georges St-Pierre explained. “I’m good at what I do and it’s not because I’m fighting Khabib that I’m gonna change my way of fighting. The way I fight, that’s how I’ve been successful all of my career. I think the mistake that a lot of guys are doing when they fight Khabib is that they change the way they’re fighting because Khabib is very known to be probably the best wrestler in the sport. (But) I’m good with the takedown, to mix it up. It’s not because I’m fighting Khabib that I’m not gonna mix it up with him. If I have a chance to put him down, I’m gonna try to put him down. I believe in my chance to put him down and I’m confident in myself.

“I think confidence is a very important piece of the puzzle in MMA to be successful and I believe a lot of guys when they fight a legend fighter status, part of that confidence and their skill goes out the window,” Georges St-Pierre added. “That’s one of the mistakes I would not do because I know Khabib would not do it against myself.”

How do you guys think the fight would have gone? Let us know in the comment section below.