Georges St – Pierre talks about his injury, his contract stipulation to fight Whittaker next, and Jon Jones 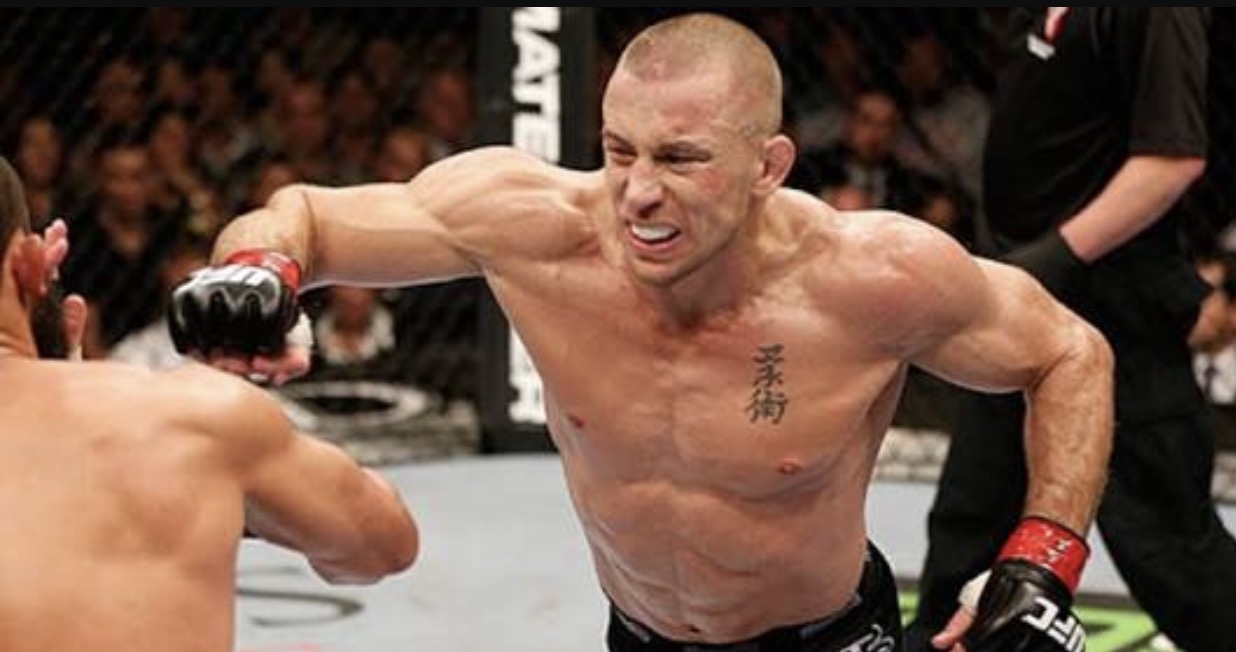 This past weekend, one of the greatest fighters to ever step inside the cage, Georges St – Pierre took his rightful place at the
helm. However, it wasn’t in a weight class he was accustomed to, and dominated for so long. Instead, he returned to fight Michael Bisping at 185 lbs, and dethroned the former champion.

However, GSP wasn’t around for long after the fight, and had to be rushed to a medical facility. It was revealed earlier today that Georges was given a 45 day medical suspension, and the new UFC Middleweight Champion revealed the reason an hour ago during the UFC media conference call.

“Yeah, I spent a lot of time in the Octagon”, GSP told the reporters, when asked about lingering in the Octagon after the fight ended. “I was very well prepared for this fight on Saturday. I was, uh, I wanted to be there. There’s no other place in the world where I wanted to be. I chose this. It did not choose me. Like I said, when I was the champion, it chose me. But now I chose to be there, and I was very happy. (I was) very motivated, and I was very happy.

I did it because I wanted to have a memory of an achievement that I’ve done, and if I had not come back, I would have regretted for the rest of my life. So I’m very happy.”

Dana White told the reporters during the post fight press conference that GSP had to be hauled to a hospital after the fight. With more news coming out about Rush’s injury, GSP cleared the air during the call.

“During the fight, I got hit with an elbow behind my head, in the base area, at the back of the skull. It is attached to the spinal cord, and what happened was, when I got hit, I got kind of a flash… a flash knock down a little bit. My neck got inflamed; I got a very bad inflammation in my neck, and I couldn’t really move my head.

Especially at the end, when I cooled down, I was feeling terrible. I couldn’t even tie my shoes. It was very bad. I didn’t know what it was. It was in my cranium — the skull attached to my neck, because of an elbow that I received. I think it happened… I rewatched the fight to see when it happened. It happened I believe in the first round.

It looked very insignificant, when it happened if you watch the video, but it really… it was really there. It was not the strength of the hit, but was more precision of it. That’s how it is. It wasn’t his (Bisping) fault. We’re not allowed to hit there, but I don’t think it is his fault. It was just in heat of the fight that we did it, and it’s normal.

What happened is, my neck was (so) inflamed that when I was on the floor, I couldn’t… I had a hard time posturing up to strike, because it was hurting me very badly. I felt like my muscle couldn’t contract. I couldn’t contract my head, posture up and strike. It was a very weird feeling. I felt like my muscle was numb and dead, and it was very strange.

After the fight, when I cooled down, it was terrible. My neck couldn’t move. It was very bad. Now it’s still sore, but it got a lot better now, I got treatment on it, and now I’ll be back at 100% very soon. I believe it’s an elbow that happened when I went for a takedown. I was in a position that I was grabbing his leg, and he was forcing his right hand down, and with his left hand, he elbowed me in the back. That’s the elbow that hurt me.

Georges St – Pierre on fighting in the middleweight division, and his contract stipulation

With Bisping losing his crown jewel, the fighters in the 185 lbs division have shifted their focus to GSP. Luke Rockhold recently pondered where Georges would now move down to 170 lbs, and once again hold the title hostage. However, GSP extinguished those flames right away.

“I don’t have any attention of making that guy (Luke Rockhold) lose time, you know? I’m going to go for a vacation next week, and after the vacation I’m going to talk to the UFC about it, and see what my next move is.

Right now, in my contract it is written that I have to fight Robert Whittaker, but a lot of things can happen in MMA, you know?You see things changing all the time. I’m going for a vacation to forget about fighting, and not think about it. But, as I said, it’s not my job to think about it (his next fight), it is the UFC and my agent. They are going to talk about it and see what my next move is.

For sure, I know what I don’t want to do. The title has been on a hold for a long time and that’s not my intention. There is going to be news about it in the next few weeks. But I don’t plan to hold the title and not defend it or whatever. I’m not going to do that. I know there are other guys in line, like Luke Rockhold, Whittaker and all these guys. They have a family to feed, and it’s not my intention to put everybody on freeze. That’s not what I want to do.”

About Jon Jones and the “Greatest Of All Time” discussion

During the call, St – Pierre was asked about the fantasy rankings the fight fans are interested in, especially the much debated “Greatest Of All Time” discussion. With GSP winning the middleweight belt, the fans have now included the new middleweight kingpin in the discussion, which previously involved two fighters in particular – Demetrious Johnson, and Jon Jones.

With Jon now looking at a considerable lay – off, GSP was asked if that eliminated him from the G.O.A.T discussion. However, GSP immediately shot down the notion, saying it was nothing but humbug.

The best team doesn’t always win. The team that wins is the team that plays the best on the night of the game. Same thing in fighting. People think fighting is different. “Oh this guy is stronger than this guy. This guy is always going to win”. That’s not true. Maybe one day I’m going to make a mistake, and I’m going to lose, to a guy who is not as good as me. Maybe nine times out of ten I will beat him. So there is no such thing as the greatest of all time. It doesn’t exist.

It’s an illusion, and we can speculate about it, in terms of achievement. The way I think now is because of the experience I’ve gained over time. Everybody can beat everybody at any given day, and at any given time. That’s what I’ve learnt.”