Gilbert Melendez says he is leaving UFC on great terms

Former two-time lightweight title contender Gilbert Melendez was released by the UFC after riding on a five-fight losing skid. The 37-year old signed with the company back in 2013.

El Nino’s sole victory inside the Octagon came to Diego Sanchez at UFC 166. The fight is often regarded by many as one of the most exciting fights in the UFC. Joe Rogan called the fight the “new greatest fight of all-time” during the pay-per-view broadcast. Melendez’s record inside the UFC is 1-6. 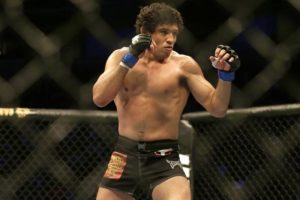 In a recent interview with ESPN, he said that he is leaving UFC on great terms.

“It was a fun ride with UFC that I really enjoyed,” Melendez told ESPN. “I feel I gave them one of the more entertaining fights in their history (against Diego Sanchez), and I appreciate all they’ve done. They’ve done a bunch of cool stuff for all their fighters,” he added.

“The said, I do feel this release is mutual. I was ready to move on. I feel like if I were to fight again, it would like to do it on my own terms and steer my own ship. The UFC is a fantastic organization, but they have their agenda, and unless you’re a champion or super-strong needle mover, you don’t have as much say in your career,” he added.

“If I do get back in the cage, I want it to be with a company that agrees with the path that I want to be on. But I’m leaving UFC on great terms.” (H/T – MMAmania.com)