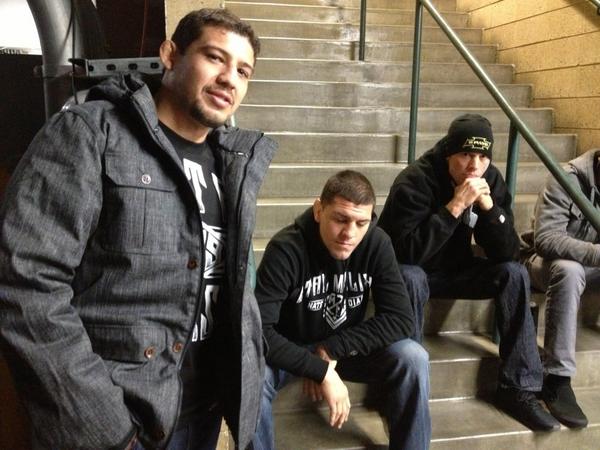 There’s both good and a not so good news for the fans of the Diaz brothers. A part of the famed “Skrap Pack” of Northern California fighters that included the Diaz brothers, Gilbert Melendez told Chael Sonnen on his “You’re Welcome” podcast that while Nick is retired, Nate is still training hard.

“Nate’s training hard. He’s doing great. His brand his huge. He’s so dang famous. The guy is an A-lister now. Everyone knows where he goes.”

The two time Conor Mcgregor opponent was booked up for a fight against Dustin Porier last November at UFC 229. However, the fight didn’t take place courtesy of Porier pulling out at due to injury. As of now, Nate is living the high life in California.

“He’s big in the cannabis game out there and hanging out with celebrities, doing appearances. Being a real businessman out there. He has his specialties, and he’s doing good. He’s training all the time, living a good lifestyle.”

As of the other half of the Diaz brothers, per the former Strikeforce champion, Nick has now hung up his gloves.

“And our boy Nick, he’s been retired. I would love to see him come back but the last time I checked he’retired.”

Nick was also linked briefly for a fight with Jorge Maswidal. However, he later came out and claimed that he had never agreed for a fight and called the UFC “rude” for trying to “lowball” him.

Melendez, however, doesn’t rule out the possibility of a comeback by Nick.

“If anybody can come back and stay on track, it’s him. I’d love to see him back one day. If the fight and contract is right, he’ll come back. There’s nothing holding him back except his own decisions. He’s in shape. He’s in dang shape. … I think he’s always running and staying ready. He’s a ninja. He’s always ready.”