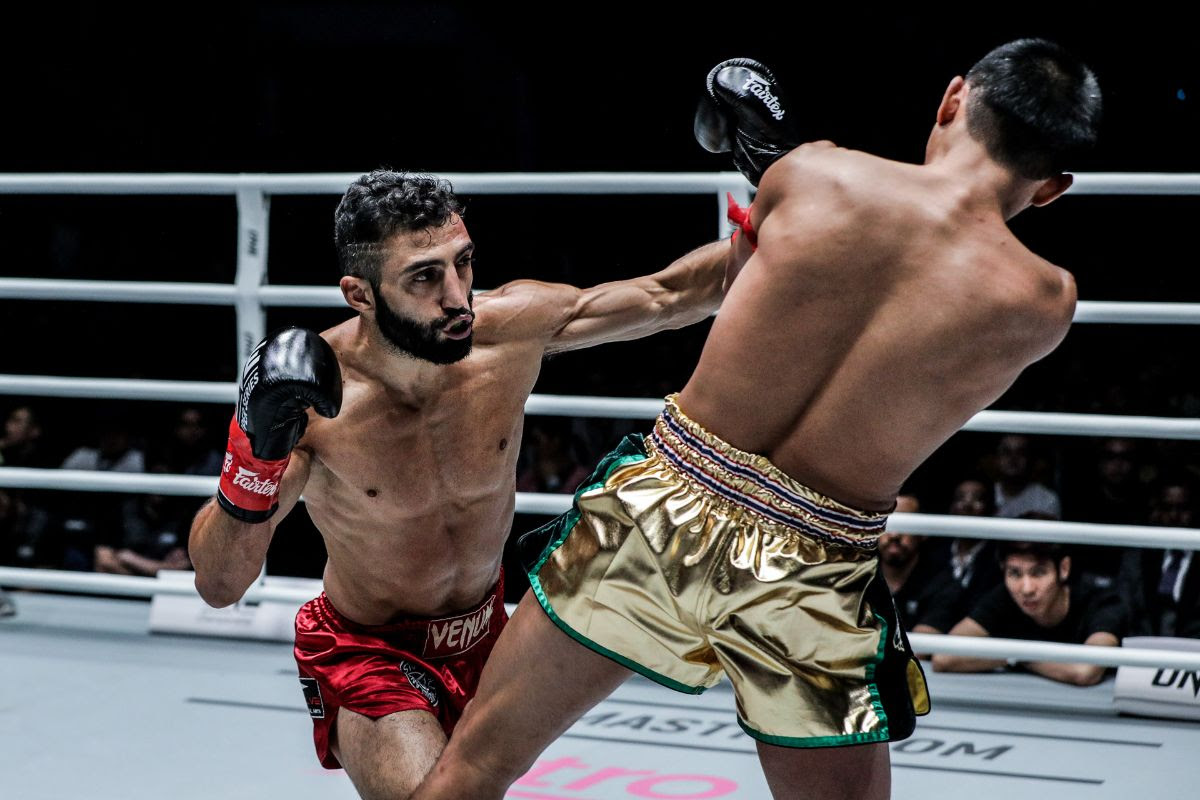 The largest global sports media property in Asian history, ONE Championship™ (ONE), once again thrilled the capacity crowd at the Axiata Arena in Kuala Lumpur. ONE: MASTERS OF DESTINY played host to a world-class martial arts spectacle. In the main event, kickboxing superstar Giorgio “The Doctor” Petrosyan of Italy put together a comprehensive performance, defeating opponent Petchmorakot Petchyindee Academy of Thailand by unanimous decision after three rounds. In the co-main event, Brazilian Jiu-Jitsu World Champion Michelle Nicolini of Brazil upset superstar “Unstoppable” Angela Lee of Singapore, winning by unanimous decision.

In the main event of the evening, Italian-Armenian kickboxing icon Giorgio “The Doctor” Petrosyanadvanced to the semi-finals of the ONE Featherweight Kickboxing World Grand Prix after defeating Thai legend Petchmorakot Petchyindee Academy by unanimous decision. Petrosyan was aggressive all throughout the three-round contest as he stormed Petchmorakot with crushing combinations to secure the decision victory. Petrosyan advances to the semi-final round of the tournament and will now face ‘Smokin’ Jo Nattawut in a highly-anticipated rematch at ONE: DREAMS OF GOLD in Bangkok, Thailand. 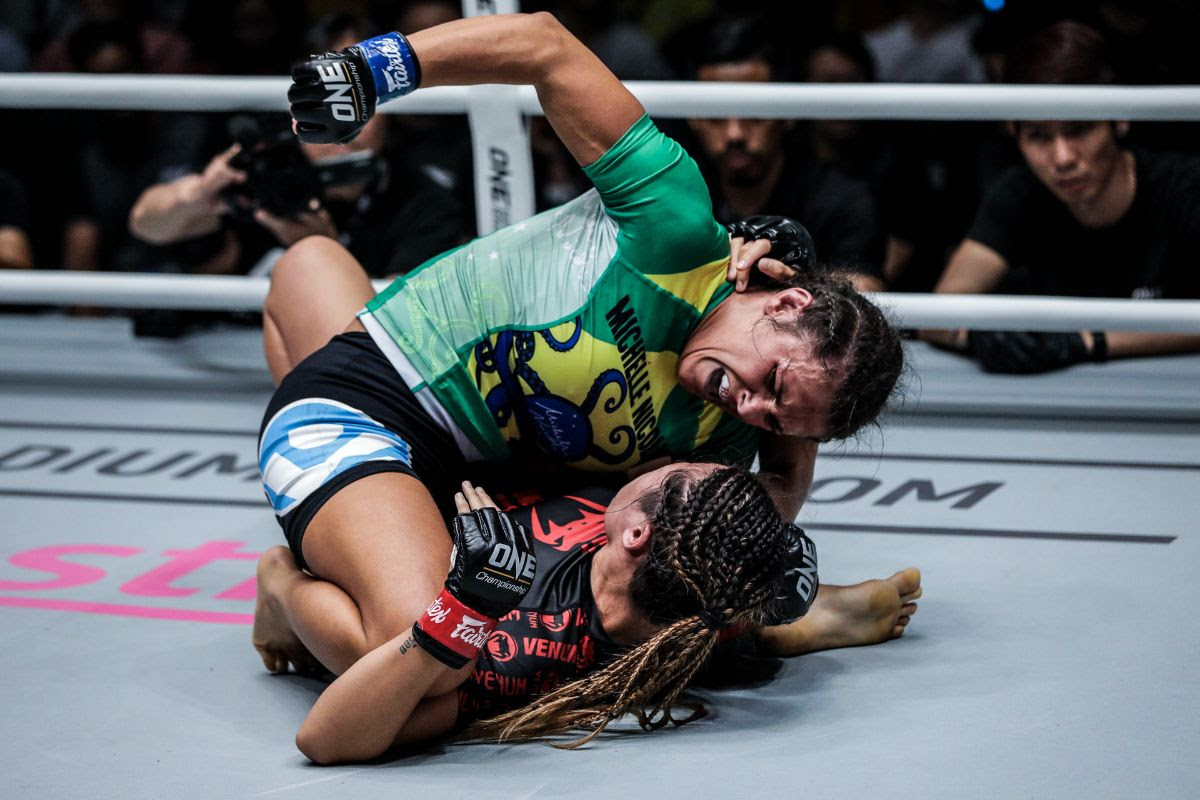 In a women’s strawweight co-main event, two of the world’s best grapplers put on a show as eight-time Brazilian Jiu-Jitsu World Champion Michelle Nicolini of Brazil scored the biggest win of her ONE career, defeating ONE Women’s Atomweight World Champion “Unstoppable” Angela Lee of Singapore by unanimous decision. Nicolini was relentless in her takedowns as she repeatedly grounded Lee and controlled her on the mat. “Unstoppable” had her moments as she put her Brazilian foe in some precarious situations, but in the end, it was Nicolini who was hailed the winner after three grueling rounds.

Malaysian former world title contender Ev “E.T.” Ting sent the Axiata Arena into a frenzy after scoring a fantastic second-round submission win over former Pancrase Welterweight World Champion Daichi Abeof Japan. Ting survived some early trouble after getting rocked in the first round and rallied to take control of the bout. In the second round, Ting was able to catch Abe in a deep rear naked choke to force the tap and return to his winning ways.

Up-and-coming Indian star Gurdarshan “Saint Lion” Mangat remained undefeated in his ONE Championship campaign with a unanimous decision win over Abro “The Black Komodo” Fernandes of Indonesia/Timor Leste. Mangat made excellent use of his reach advantage as he picked Fernandes apart with some fluid striking. Fernandes attempted a last-minute haymaker but could not follow through, as Mangat walked away with his second win under the ONE banner.

Malaysian hero Jihin “Shadow Cat” Radzuan returned to the winner’s circle in spectacular fashion with a first-round submission win over Jomary “The Zamboanginian Fighter” Torres of the Philippines. Radzuan weathered an aggressive opening round from Torres to take the action to the ground and lock in a deep triangle choke. Torres tried to power out of the submission attempt but ultimately tapped out to give Radzuan the comeback win.

American wrestler Troy “Pretty Boy” Worthen was dominant in his ONE Championship debut, stopping previously undefeated “The Ghost” Chen Rui of China via second round technical knockout. The former NCWA Wrestling Champion showed off his excellence on the mat as he grounded Chen and punished him from the top with strikes. Worthen took Chen down once more in the second round and dished out more punishment to secure the stoppage win in his maiden ONE appearance.

Japanese star Hiroki Akimoto collected his second win on the ONE Super Series stage with a unanimous decision victory over Australia’s Kenny “The Pitbull” Tse. The former WFKO Karate World Champion Akimoto put his talents on full display as he outstruck Tse throughout the three-round contest. Tse had no answer for Akimoto as he coasted to a convincing decision win.

American striker Janet “JT” Todd kept her hot streak going after picking up a huge decision win over former ONE Atomweight Kickboxing World Champion “Killer Bee” Kai Ting Chuang of Chinese-Taipei. Todd pressed the action from the opening bell, coming at Chuang with crisp combinations. Chuang kept it competitive, but at the end of three rounds, it was Todd who was declared the winner.

In a rematch of their first encounter in 2018, South Korea’s Dae Sung “Crazy Dog” Park authored another electric technical knockout victory over rival Kimihiro Eto of Japan. The first round saw both athletes on even footing, with each having their moments in a fast-paced and exciting contest. In the second round, Park found success with his high kicks, rocking Eto who tried his best to survive. Park’s power was too much for Eto to overcome however, as “Crazy Dog” put the finishing touches on his opponent via ground-and-pound.

Top-rated Finnish mixed martial arts star Aleksi “The Giant” Toivonen made his ONE Championship debut a triumphant one, posting a thrilling first round submission victory over opponent Akihiro “Superjap” Fujisawa of Japan. Fujisawa tried to stay on the outside to counter but as soon as Toivonen closed the gap, he was able to bring the action to the ground. On the mat, Toivonen swiftly transitioned into a rear naked choke, forcing the tap.

In an all-Malaysian showdown, Mohammed “Jordan Boy” Bin Mahmoud met countryman Saiful “The Vampire” Merican in a ONE Super Series Muay Thai bout. For three back-and-forth rounds, the two warriors exchanged fiery combinations to the delight of their hometown crowd. Mohammed scored a knockdown a quarter of a minute into the second round, courtesy of a wild right hook. “The Vampire” was able to beat the mandatory standing eight count. For the rest of the contest, Merican, who was coming off a lengthy layoff, looked sharp and powerful. However, it was Mohammed who was the busier, more accurate striker. In the end, all three judges scored the bout in favor of Mohammed to win by unanimous decision.

Indonesian sensation Adrian “The Papua Badboy” Mattheis continued his streak in the ONE Championship strawweight division as he scored a scintillating technical knockout victory over opponent Li Zhe of China. As Li chased Mattheis across the ring in pursuit of a takedown, Mattheis picked him apart with explosive combinations. In the second round, Mattheis was able to take the action to the mat, where he unloaded his ground-and-pound to force the stoppage.

A closely-contested women’s atomweight bout ensued when Myanmar’s Bozhena “Toto” Antoniyar met Vietnamese-American Bi “Killer Bee” Nguyen. Both ladies came out of the gates firing, and appeared evenly matched from the start. While Nguyen relied heavily on her diverse Muay Thai striking, it was Antoniyar who found success with her boxing. In the end, two of the three judges saw the bout in favor of Antoniyar for the split decision victory.

In a ONE Super Series Muay Thai contest, Thailand’s Sorgraw Petchyindee Academy and Scotland’s George Mann brought the Axiata Arena crowd to its feet in an action-packed affair. The two featherweight strikers took their time trading their best shots all across the ONE Championship ring. In the end, it was Sorgraw who earned the nod from two of three judges ringside, taking home a hard-earned split decision victory.

Kicking off the action at ONE: MASTERS OF DESTINY were ONE Super Series entrants Josh “Timebomb” Tonna of Australia and Yoshihisa “Mad Dog” Morimoto of Japan. Tonna overcame a spirited start from Morimoto, who was aggressive early. Picking up the pace in the second round, Tonna made some key adjustments to put the pressure on Morimoto. Tonna then finished strong and all three judges scored the bout in his favor to win by unanimous decision.