From UFC President Dana White saying women will never fight inside the octagon, to a female champion in race for the #1 pound-for-pound spot.

Though the first female fight inside the octagon was in 2013. The roots of female MMA date way before that. Looking back, we honor the pioneers and greatest female MMA fighters of all time. 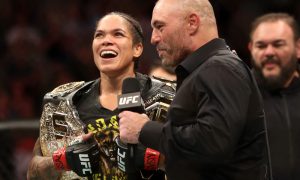 Though Carano never fought in the UFC or never became a champion, the roots of female MMA commence from her. She clearly lead the way and laid out a solid blueprint for others to follow. She made her pro debut back in 2006. With two knockouts, she made her Strikeforce debut against Elaina Maxwell later that year. The bout was the first televised female fight on Showtime.

She then won four fights outside Strikeforce extending her then undefeated streak to seven. The streak includes a submission win over Tonya Evinger, who went on to become Invicta FC women’s featherweight champ.

Carano made her return back to Strikeforce to fight for the inaugural Strikeforce women’s featherweight championship.

Her only defeat came against Cyborg, who later on became the best female fighter for a period of time. Carano went on to become a successful film and television actress as well.

Cyborg defeated Carano to become the inaugural Strikeforce women’s featherweight champion. The win began a stellar period in the chapter of women’s MMA. Cyborg made her pro debut back in 2005. She tasted defeat in her first fight. However what started after that was a gruesome 20 fight winning streak for 13 years. 17 of her 20 wins came by the way of KO or TKO.

Cyborg made her UFC debut in a catchweight bout against Lina Lansberg in 2016. After destroying her, the UFC introduced a featherweight division. Cyborg took on former Invicta FC bantamweight champion Tonya Evinger for the inaugural FW title in July 2017. She dominated the fight to became the first UFC women’s featherweight champ.

Cyborg then took on former UFC bantamweight champion Holly Holm at UFC 219 in December 2017. She won the fight via a lopsided unanimous decision. Cyborg then made quick work of Yana Kunitskaya at UFC 222 in March 2018.

Cyborg then took on bantamweight champion Amanda Nunes in a super fight. She lost the fight via first round KO. A dispute with the UFC made her join hands with Bellator. Obviously in her Bellator debut, she went on to become Bellator women’s featherweight champion as well.

Rousey paved the way for modern women’s MMA. She took on Liz Carmouche in the first female bout in the history of the UFC. She defeated Carmouche via her signature armbar to become the first UFC women’s bantamweight champion.

Alongwith her fighting style, Rousey carried a dominating bravado and aura. The personality backed up with her performance, would make her steam roll through her opponents. She went on to defend her title five times, which is highest in the history of the sport- before being shocked by a Holly Holm knockout.

A select few made bank betting on Holly through sites like CasinoCaptain Betting.

Even though she lost her last two fights, Rousey will go on in the history books as a pioneer of modern day female MMA. Women’s MMA won’t be discussed without mentioning this legend’s name.

Nunes unlike Carano, Cyborg and Rousey didn’t have a huge name at first. She had to build her name towards the top of the food chain. After defeating notable names like Shayna Baszler and Valentina Shevchenko, she got her chance to fight for the title. She defeted Miesha Tate to become UFC women’s bantamweight champion in 2016.

Stepping in as a heavy underdog, Nunes pulled of a huge upset as she knocked out dominant champion Cris Cyborg in the first round to become first female fighter to hold belts in two different weight classes. Many consider Nunes to be the best female fighter ever till date.

Shevchenko started as a bantamweight as she was too big for strawweight but too small for a bantamweight. Shevchenko took on Nunes for the bantamweight title in 2017. She was just marginally edged by Nunes in a split decision, which many believe she won till date.

However after UFC introduced women’s flyweight division, it marked a new era in the history of the sport. Shevchenko took on former strawweight champion Joanna Jedrzejczyk for the flyweight title in 2018. She earned a lopsided decision win to become women’s flyweight champion. She has since defended her belt thrice which includes brutal finishes over Jessica Eye and Katlyn Chookagian.