GSP shoots down Kamaru Usman fight: ‘I am staying retired’ 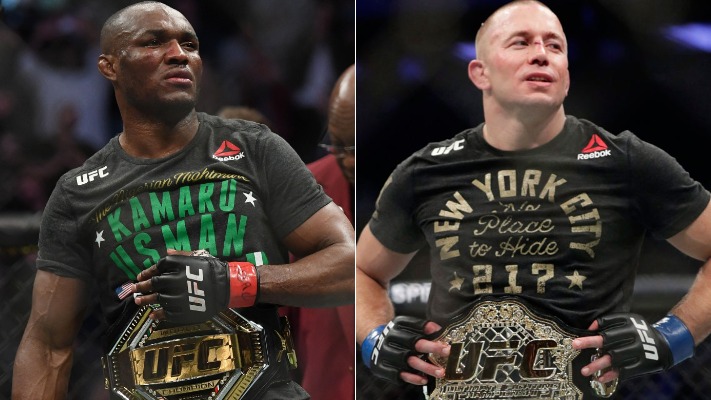 UFC welterweight champion Kamaru Usman has been on a dominant run in the UFC. He is coming off of a unanimous decision victory over Jorge Masvidal earlier this month at UFC 251.

The judges scored the fight 50-45, 50-45 and 49-46 in favour of Kamaru Usman. This is Usman’s second title defence. ‘The Nigerian Nightmare’ fought to his strength and put on a wrestling clinic throughout the fight. 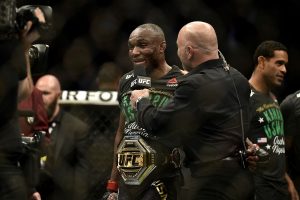 Kamaru Usman outstruck Jorge Masvidal 94-66 in terms of significant strikes. He also scored 5 of his 16 attempted takedowns and was able to pass guards twice in the fight. With a win over Masvidal, the UFC welterweight champion is now eyeing UFC Hall of Famer Georges St-Pierre.

“Honestly, I would have to say Georges St-Pierre,” Usman told TMZ Sports recently (via MMA Fighting). “Right now we’re tied for the record- most consecutive wins in the welterweight division – and Georges is a tough guy, Georges is a legend. Georges is a guy who has put his time in and is considered one of the best and that’s where I aim to be. Georges can still do it. He proved it, what, two years ago when he came back, that he can still do it.

“And I feel that he’s still able to do it. He’s still able to come in and be that opponent where people are unsure. Like, ‘You know what? We don’t know if Usman’s got this one.’ I think Georges St-Pierre can be that guy and that’s what I’m looking for. Those are what champions are made of. When you get that feeling, ‘I’m not sure. This one’s a tough one. I don’t know how this one is gonna go but I’m gonna damn well go out there and compete and see what happens.’ I think Georges St-Pierre can be that guy and if Georges wants to do it, Georges can get it too,” Usman said.

“Georges knows what he’s done with his legacy,” Usman said last week in an interview with TMZ. “He’s cemented his legacy. He’s put in the time, he’s put in the work, and that’s why he sits at the top as one of the best ever. So I’d love to test myself. I’m a martial artist just like he was a martial artist and if he still has some fire burning in that oven, let’s test it out. Let’s go out and see if he can still do it.”

“I’ve done it for a very long time, and unfortunately in my sport there’s too many guys that retire too late, and I do not want to be one of these guys,” St-Pierre said. ”I’m very fortunate. I’m healthy, most importantly. I’m also wealthy. I came at the right time, I made a lot of money. When I measure and calculate the pros and cons, it’s better that I stay retired.”

Do you guys think GSP should come back and fight Kamaru Usman?

“I feel strong, I feel fast” – Alexander Gustafsson says he is eyeing title shot at heavyweight