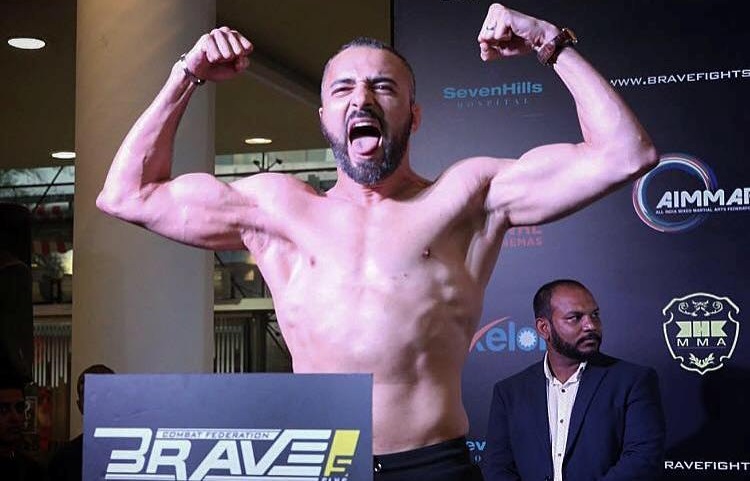 The rivalry between Welterweights Tahar Hadbi and Mohammad Fakhreddine will be settled once and for all at Brave 10: The Kingdom Rises, set for Amman, Jordan, on March 2nd. After their controversial No Contest at Brave 9, when an accidental low blow from Hadbi ended the fight, Fakhreddine started to mock his opponent with social media videos depicting the low blow. While Hadbi laughed off the provocations, the Obyfight product promised to make his arch-rival cry when they meet again.
“I did not pay too much attention to Fakhreddine’s latest provocations. Honestly, I have other things to do. I just saw a video that made me laugh, he plays really well the comedy, it reminds me of our last fight. But I’ll tell him this: Fakhreddine, do enjoy your little funny videos, because I will make you cry at Brave 10”, claimed “Fast Hands”.
Before the kick to the groin ended their first encounter, the French-Algerian and the Lebanese had a great first round, and Hadbi admits that he learned a lot from the first five minutes he spent inside the cage with Fakhreddine.
“You can learn a lot about your opponent having spent five minutes inside the cage with him. First, I thought he was powerful, now I know that he’s not. Second, he landed some good low kicks but I already knew it. He did the same in every previous fight he had, so I will defend it better and for the rest, I won’t say more, people will have to tune in”, said the Welterweight, who agrees his rivalry with “The Latest” is the biggest in Brave Combat Federation’s history.
“I do think it’s the biggest rivalry in the history of the promotion. A lot of people want to see this fight, and I hope we are going to give them a great show!”
Brave 10: The Kingdom Rises marks the promotion’s first show in Jordan, home to some of Brave’s most decorated fighters, and the seventh country to host a Brave Combat Federation event, after Bahrain, Brazil, the United Arab Emirates, India, Kazakhstan, and Mexico.
Brave 10 Full Fight Card:
Featherweight title bout: Jakub Kowalewicz (Poland) vs Elias “Smile” Boudegzdame (Algeria)
Welterweight bout: Jarrah Al Selawe (Jordan) vs David Bear (France)
Lightweight bout: Charlie Leary (UK) vs “The Pride of Palestine” Abdul Kareem Al Selwady (Jordan)
Welterweight bout: Mohammad “The Latest” Fakhreddine (Lebanon) vs Tahar “Fast Hands” Hadbi (France)
Welterweight bout: Pawel Kielek (Poland) vs Tyler Hill (USA)
Bantamweight bout: Felipe Efrain (Brazil) vs Frans Mlambo (Ireland)
Featherweight bout: Dylan “The Nuke” Tuke (Ireland) vs Sodiq “Super” Yusuff (USA)
Bantamweight bout: Jalal Al Daaja (Jordan) vs Crisanto Pitpitunge (Philippines)
Catchweight bout (74kg): Mohammad “The Killer” Ghorabi (Lebanon) vs Gadzhimusa “Deadshot” Gaziev (Russia)
Middleweight bout: Tarek Suleiman (Syria) vs Will Fleury (Ireland)
Bantamweight bout: Nawras “The Honey Badger” Abzakh (Jordan) vs Abdul Hussein (Finland)
Middleweight bout: Chad “Superman” Hanekom (South Africa) vs Ikram Aliskerov (Russia)

Previous articleUFC: UFC Lightweight James Vick calls out the who’s who of the division through hilarious photoshop
Next articleWill Fleury dismisses Tarek Suleiman’s challenge: ‘I wouldn’t even spar with him’