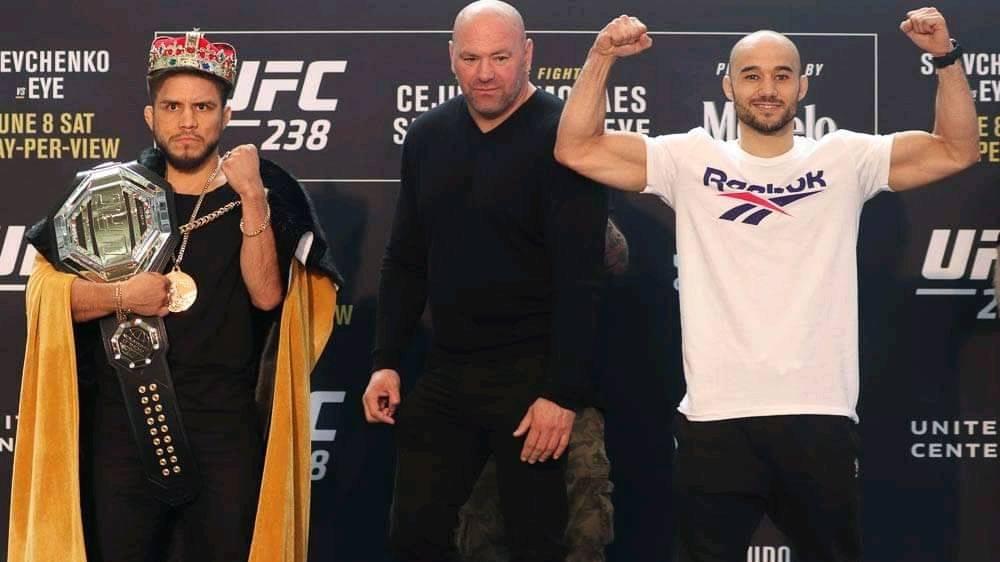 Henry Cejudo doesn’t chide away from throwing away unprecedented gimmicks during media outings. Interestingly enough, he also ensures that his next act is always better than the previous ones.

During UFC 238 media day, Cejudo came in his full royal regalia which included a robe, a crown, his Olympic gold medal, his UFC title, a hat with a wand to boot. He then proceeded to perform a full-fledged magic show infront of the media and the audience present.

He would take out Mickey Mouse, a snake and a rabbit from his magic hat. Ironically enough, Moraes’ nickname is “Magic” and he couldn’t help but laugh at his opponent’s act. On the first look it may seem as an act intended purely for the purpose of amusement. However, “The Messanger” would explain that there was a planned message that he wanted to deliever.

“I don’t believe in magic,” Cejudo said speaking to MMA Junkie. “I believe tricks are for kids. I pulled out Mickey Mouse, which is Demetrious,” Cejudo explained, referencing his upset win over former longtime 125-pound king, Demetrious Johnson. “I pulled out the snake, which is T.J. And then I pulled out the rabbit, which was Marlon Moraes, and then I kicked it. That’s my magic trick,” he said. “I don’t believe in magic. It’s all a bunch of illusions. Show me Saturday night.”

At UFC 238, Cejudo will look to join an elite class of people who have held UFC belts in two divisions simultaneously. Having already captured and defended the 125 pound belt, Henry is now eyeing the vacant 135 pound bantamweight belt. Standing in his way will be Marlon Moraes, who has been waiting for a title shot since making his debut in the UFC two years back.

WATCH: UFC 238 Media Day face-offs of all the fighters involved

WATCH: Open workouts of the fighters involved in UFC 238

Previous articleWATCH: UFC 238 Media Day face-offs of all the fighters involved
Next articleNiko Price calls out Platinum Mike Perry: Let’s get in there and put on a show