Henry Cejudo’s number one fan in the world is a…Russian?!”

Henry Cejudo is at the top of the world after beating UFC pound for pound flyweight champion Demetrius Johnson last month at UFC 227 in Los Angeles at Staples Center.

His upset victory over Demetrius Jonhson has earned him respect from MMA fans and he is the love he deserves. However, he recently visited Russia, for UFC’s first ever event in Moscow and he met his number one fan over there of which he shared an Instagram post thanking him. 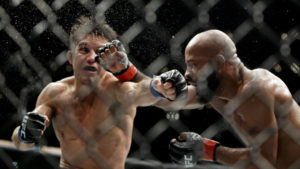 “Can’t put into words how much everything has come full circle in my life. I was able to meet my number one fan in the world @inspired.guy This young man has gone above and beyond what any fan could ever do. I remember posting a picture of him years ago talking about how much I appreciate his love and support. This man saved all his money in his native town of Siberia, Russia to purchase a airplane ticket when he found out that I was coming to UFC Moscow. You have no idea Ruslan how much your gestures have made a impact in my life. Before I was Champion he would Photoshop a belt around my waist, he would put my name on his wrestling shoes for good luck and even learning English so he could read my autobiography American Victory. Its super cool for me to finally meet the man that admires me but little does he know how much I admire him. It was a awesome two days of spending time with him and to see the heart of the man that believes in Henry Cejudo the person. To him it was a fan experience that he will never forget and to me it was very heart felt moment to see how someone’s story could impact a kid all the way from a small town in Siberia, Russia. To all the awesome fans, thank you for all your love and support to this beautiful sport. Thank you fight fans, it’s because of you that we fight. You are our motivation that keeps us going!! Thank you #ufcrussia #besomebody #fightfans#weareone #brother”

UFC: Dominick Cruz thanks his supporters after winning the award of Best Analyst