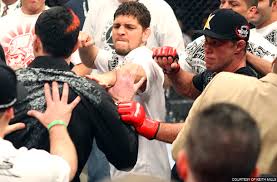 The Diaz brothers are no spring chickens when it comes to the art of brawls. Be it inside the cage, ringside, press conferences or nightclubs, there is not a person alive, ‘The Scrap Pack’ wouldn’t pick a fight against.

Popular Hollywood Comedian Marlon Wayans was caught talking to Nick Diaz outside a nightclub in Los Angeles, and had a funny story to share to TMZ Sports.

The Time When Nick Diaz floored a ‘punk’ outside a nightclub

The Scary Movie and Requiem for a dream star recalled a story of Nick Diaz in a street fight outside a nightclub, a few years back.

“I said to him and his brother, I’ve seen him one time outside a club. Some dude was about to fight them,” he said.

The Hollywood star even tried to warn his opponent – that it was not a good idea to pick on people with ‘cauliflower ears’.

Here is a video of the short interview.

Moral of the story – tread carefully if you see someone with ‘cauliflower ears’.