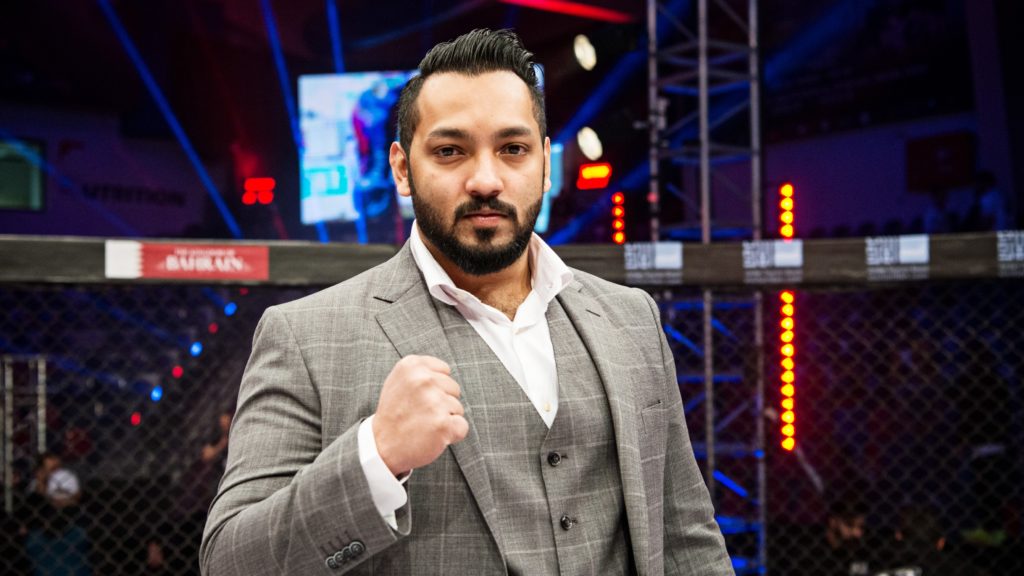 Mixed Martial Arts is one of the fastest-growing sports in the world. That is true even for the Middle East. While big promotions like UFC are only recently trying to sign long term site deals, a Bahranian promotion, BRAVE CF has been putting on world-class shows since 2016.

BRAVE CF  is working with parent company KHK MMA to bring world-class Mixed Martial Arts event to India, the Middle East and MENA markets. No international promotion in the world has as many Indian fighters signed with them as BRAVE has. If anyone deserves credit for the way BRAVE has dominated the Middle Eastern and Indian market, it goes to the president of the organisation Mohammed “The Hawk” Shahid.

Mohammad Shahid was the first-ever Mixed Martial Arts to emerge out of Bahrain. He was assigned the managerial role to develop mixed martial arts in Bahrain as the CEO of KHK MMA. Shahid has been very vocal about promoting the sport of MMA in India. Back in 2017, Shahid said that he wanted to use India as a hub to promote MMA in the ASEAN region.

Earlier this year in an interview with BodyLockMMA, ‘The Hawk’ said that BRAVE doesn’t simply venture into new territory. He said that it is essential to develop the sport of Mixed Martial Arts from ground level and change the image of the sport.

The relationship between the ministry which Shahid mentioned is quite essential where MMA in India is concerned. Right now, MMA is not a recognised sport by Sports Authority of India. So, while MMA events are organised in India, there’s no support or incentive from the government to grow the sport. BRAVE could play a fundamental role in changing that. BRAVE was founded by his highness Sheikh Khalid bin Hamad Al Khalifa, who himself is a big fan of the sport and has competed inside the cage as an amateur and boats of a perfect 2-0 record. Bahrain and India have always had friendly relations and both countries cooperate with each other on numerous levels.

When BRAVE came for the very first time in India back in 2017, Shahid made it clear about what his plans were for his organisation in India.

“We view this event as the next step towards strengthening diplomatic, cultural and economic ties between India and Bahrain. Indian athletes have been making their presence felt in various combat sports on the international level. It is time for India to go for glory,” Shahid said about BRAVE CF 5 which took place in Mumbai. (H/T – The Hindu)

Also, the current sports minister of India Mr.Kiren Rijiju is a big fan of the sport of MMA. Today, the sport of MMA slowly but surely growing in India. Today MMA gyms have popped out in every major city of India. More and more fans are being educated about this sport and while it is going to be a daunting task to make MMA a mainstream sport in India, if anyone can do it it’s going to be non-other than Mohammad Shahid.

BRAVE CF 30 which is taking place in Hyderabad is featuring a staggering 8 Indian fighters on the card, which is yet another proof of the commitment made by Mohammad Shahid about growing the sport of MMA in India. The Indian fighters present on the card are Bhabajeet Choudhury, Kantharaj Agasa, Mohammad Farhad, Rana Rudra Pratap, Manjit Kolekar, Kuldeep Singh, PMS Dawngliana, Satya Behuria.

BRAVE CF will take place at the Gachibowli Indoor Stadium in Hyderabad and tickets are available for purchase here.

Previous articleUFC: Chris Weidman pays tribute to Ben Askren on social media after MMA retirement
Next articlePaulo Costa slams ‘p***y African’ Israel Adesanya and calls him out for being scared