The stage has been set, and two of the world’s best flyweight mixed martial artists are set for a historic clash.

Reigning ONE Flyweight World Champion Adriano “Mikinho” Moraes will face 12-time Mixed Martial Arts World Champion Demetrious “Mighty Mouse” Johnson for all the marbles at “ONE on TNT I,” which airs live on American prime-time television.

However, mixed martial arts fans in India can still catch all the action. Both Hotstar and Star Sports Select 2 will broadcast the event live at 6 a.m. India Standard Time (IST) on Thursday, 8 April. 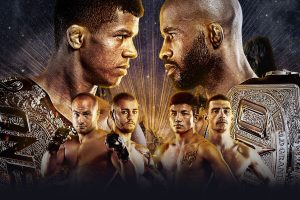 And this is certainly a show you won’t want to miss.

Along with the flyweight duo contesting Moraes’ belt, the co-main event will feature Eddie “The Underground King” Alvarez returning to action against #2-ranked lightweight Iuri Lapicus in a match that could see the winner step up to challenge – or in Lapicus’ case, rematch – ONE Lightweight World Champion Christian “The Warrior” Lee.

Main Card For “ONE on TNT I”

Lead Card For “ONE on TNT I”

Aside from watching “ONE on TNT I” on Hotstar and Star Sports Select 2, you can download the ONE Super App to catch all the action live and for free on Thursday, 8 April, at 6 a.m.