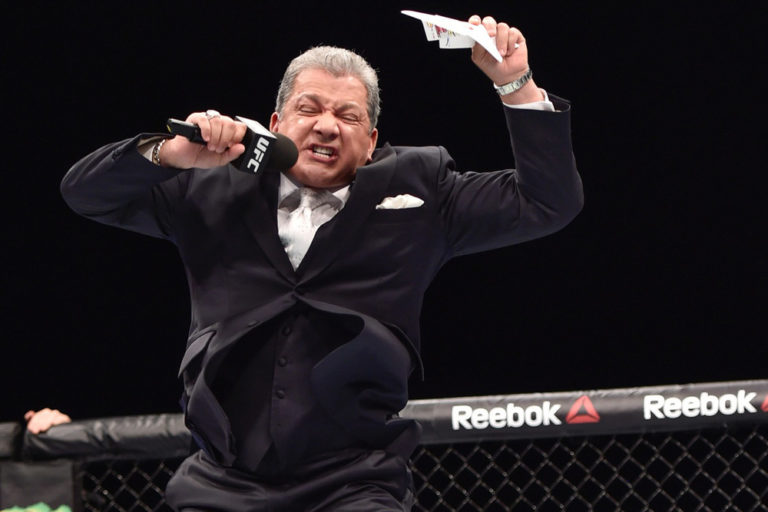 Bruce Buffer isn’t going anywhere – at least for now. The veteran ‘Voice of the Octagon’ has revealed his plans to remain with the UFC “for at least another 10 years”. 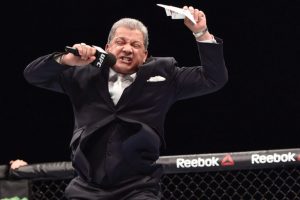 At 63, Buffer has been the ring announcer for the mixed martial arts promotion for an incredible 24 years and has become synonymous with the multi-million-dollar company. Since 1996, Bruce Buffer has been the primary ring announcer for the UFC. Buffer uses catchphrases in his UFC announcing, and also has a signature move called the “Buffer 180”, in which he motions directly across the Octagon before quickly spinning 180° and pointing to the corner being introduced. Buffer performs 45° and 90° turns before most Bruce buffer 180s but reserves the “Buffer 180” for main events and co-main events.

With every passing year, he has become more and more embedded into the DNA of the promotion with his electrifying voice and wardrobe. What always shines through whenever Bruce Buffer is holding a microphone is his natural enthusiasm and love for what he does, attributes that are still intact nearly 25 years after his debut

Bruce Buffer – The voice of UFC

“I always give 150 percent every time I walk into the Octagon. I’ve said it many times, every time I walk out on Saturday, those are the nights I have to prove I deserve the job. When I am there with no audiences with two great warriors in Stipe and DC, even when there are 50 thousand people in an arena, when the introduction happens it is just me and the fighter. Just enhance the moment.”

Buffer takes his job seriously and does all he can to keep his voice strong.

“Don’t do anything to damage it. Don’t smoke, just take care of it like you take care of your body,” he explained. “My throat is my work tool so I just do the basics and don’t abuse it.”

“I’m very humble about it all. I’m all about passion, everything I do is with a passion that is the reason why I announce the way I do. When that passion starts to fade, which is not my case, then yes that is the time I will probably announce it is my time to retire. But, I would say you are stuck with me for at least another 10 years. I’m in great shape and stay in great shape. I’m lucky to do what I do.”

Previous articleStipe Miocic says Jon Jones has ‘good technique’ to compete at heavyweight
Next articleDarren Till has a message for Sean O’Malley: “Take your loss”