Amateur fighter Hunter Boone was competing at Martial Combat League 3 event which took place in Shawnee, Okla. The fight turned out to be a disaster for this young fighter Hunter Boone as he suffered some unfortunate injuries in the fight due to mismanagement by the organization. He fought Jordan Brown in an MMA setting. According to the viewers, Hunter suffered the injury in the very first moment of the fight as he crashed into the cage and got a cut on his head. The fight was ruled a TKO and Brown was declared the winner. MyMMANews.com was the first to report. 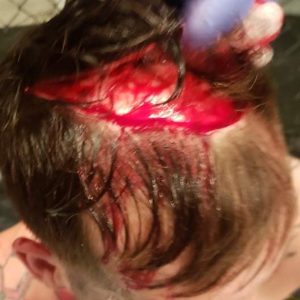 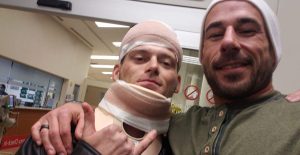 “The fighting mind. This is something some people never truly understand, and most people can’t handle even sticking there pinky toe in on the conversation because it makes them uncomfortable. How can someone agree to go lock themselves in a cage with another man who wants to do the most violent of things where a very real possibility for either one is death? Perspective, I think, is the best answer. Choosing to do really hard things in life make the hard things easy. Last night, moments before my friend made the choice to stare death in the eye, I took a step back and looked at a strong, confident, peaceful, proud, very violently capable man.”

“A man who beat the odds. A man who’s life got turned upside down only a few months ago. A man that any man would want in his corner. A man with a heart of a lion and a true morale compass. A man who, in the most fierce moment of competition, keeps fighting to take the advantage over whatever obstacle life throws in his face. A man whom I’m proud to have as a friend. A man I love like a brother. Just moments before chaos, when most men would tremble and cower in fear, my friend stood as calm as you can be. There was a sense of peace about him I’ve never seen before. He was clear. Focused. But totally in tune.”

According to Hunter Boone’s coach “A few seconds after the bell rung Hunter and his opponent spun into the cage.” Boone’s coach Jason Greer, of 10th Planet Jiu-Jitsu Altus, wrote on his Facebook page that “His opponent had a collar tie and as they hit the fence Hunter’s head slammed into the gate resulting in Hunter suffering a 20 centimeter gash across the front of his hairline from the left to the right, down the right side and towards the back basically scalping him. It knocked him unconscious immediately but he had regained consciousness before he hit the ground.” 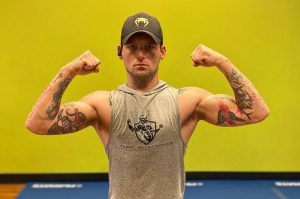 “Knowing he had just received a fight-ending blow he started scrambling from the cocoon with the idea of a triangle. Fighting for the win against all odds! I had no idea at the moment what had even happened after the ref stopped the fight and immediately called for the Doctor. I was so confused and Hunter Boone looked at me and whispered ‘Damnit man… It’s over.’ I rushed in the cage and for the first time I saw how (devastating) his injury was.”

“Let’s break this down!!!” Dalton wrote on Facebook. “Fighter Hunter Boone signs, trains, makes weight, goes to fight and gets taken down in the first 10 seconds only to hit an exposed metal bracket on the cage and sustain injury that will change him forever.. and the promotion acts like it’s not their problem??? @martialcombatleague. Also announces it as a win for the opponent… someone call judge Judy. Heal up fast”

“We’re not sure how or why concerns were brought up about us not taking care of the injured athlete, this certainly is not the case,” Hunter Boone coach said on Facebook. “We take required action and secure proper coverage to make certain qualified injuries occurred are covered prior to every event we promote.”

Previous articleCanelo Alvarez’ Record in 2021 and His Next Move in 2022
Next articlePro B-Baller Rudy Gobert – “The Apprentice: ONE Championship Edition” Superfan