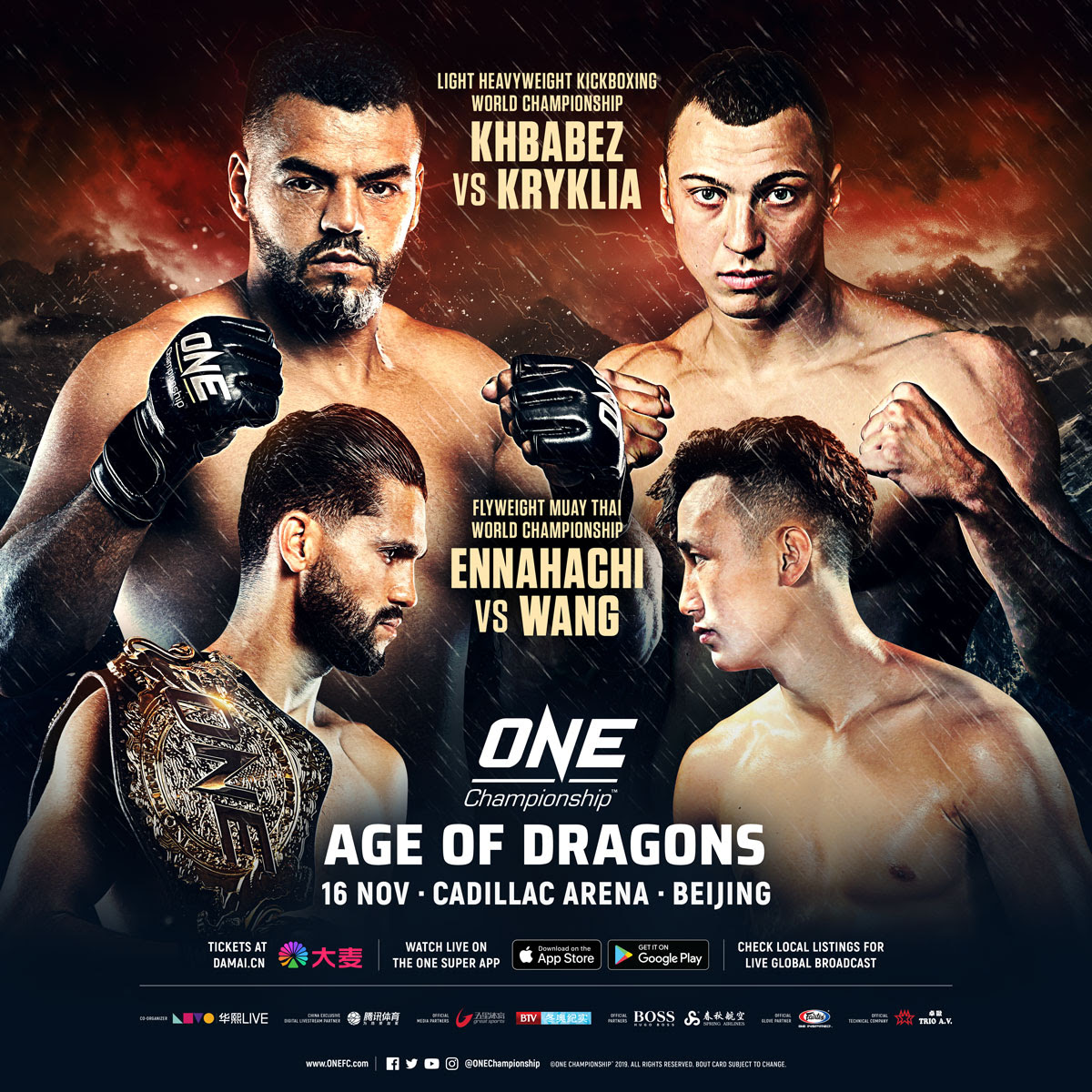 COMPLETE CARD ANNOUNCED FOR ONE: AGE OF DRAGONS FROM BEIJING ON 16 NOVEMBER

The largest global sports media property in Asian history, ONE Championship™ (ONE), has just announced the complete card for ONE: AGE OF DRAGONS, set to take place at the Cadillac Arena in Beijing on Saturday, 16 November. Once again, the world’s greatest martial arts athletes are ready to descend upon the Chinese mainland to showcase their incredible skills.

ONE Championship has also announced a partnership with Bloomage International, who is the strategic partner and will work closely with the organization in developing the ONE Championship brand across all platforms.

Bloomage International has three main pillars: investments, operations, and commercial real-estate industries. The organization owns more than 30 subsidiary companies, holding companies, and joint-stock companies. It also owns the world-renowned stadium, the Cadillac Center, which is the only venue that has the capacity to host both the Summer Olympics and Winter Olympics.

Hua Fung Teh, Group President of ONE Championship, stated: “It is my pleasure to announce ONE Championship’s partnership with Bloomage International. We are constantly on the lookout for the right partners to join us in bringing authentic martial arts to a worldwide audience. I am super excited to also announce our next show in Beijing, ONE: AGE OF DRAGONS. ONE Championship remains dedicated to delivering Chinese martial arts fans the very best in sports entertainment. Showcasing our elite Chinese ONE Championship athletes and giving them the global platform to shine is our goal. I can’t wait for this amazing event this November!”

Zhao Yan, President of Bloomage International Investment Group, stated: “We are very pleased to be partnering with ONE Championship, a globally influential sports media property. Bloomage International Culture and Sports Development Co Ltd, a wholly owned subsidiary of Bloomage Group, has long been committed to the development of China’s culture and sports industry, and has deep experience in operating world-class sports stadiums and events, and developing sports intellectual property assets. Our development goal aligns with ONE Championship’s vision in China, and we are confident that this cooperation will be a successful model of large-scale cultural and business cooperation between China and Singapore companies.”

In the main event, reigning ONE Flyweight Kickboxing World Champion Ilias Ennahachi of the Netherlands will defend his World Title against challenger “Metal Storm” Wang Wenfeng of China.

Also, in the co-main event, Tarik “The Tank” Khbabez of Morocco and Roman Kryklia of Ukraine will do battle for the inaugural ONE Light Heavyweight Kickboxing World Championship.

Ennahachi’s first World Title defense won’t come easy, as he is tasked to take on local martial arts hero, Wan Wenfeng, who will no doubt have the full support of his hometown fans in Beijing.

In the evening’s co-main event, the inaugural ONE Light Heavyweight Kickboxing World Champion will be crowned when Khbabez meets Kryklia at the center of the ONE Championship ring.

Khbabez, a 2-time SUPERKOMBAT Heavyweight World Champion, is known for his aggressive style, and his fast and powerful combinations. The heavy-handed Moroccan striker has been perfect so far in ONE Super Series, winning all four of his bouts impressively.

Khbabez’ latest conquest came last June, when he toppled Brazil’s Anderson Silva to win by unanimous decision in front of Chinese fans in Shanghai. The victory earned him a spot opposite Kryklia in this World Title matchup.

Kryklia, on the other hand, is currently riding an eight-bout winning streak heading into his ONE Super Series debut. He is a former Kunlun Fight World Champion.

More ONE Super Series action is slated for ONE: AGE OF DRAGONS.

Legendary Thai warrior “The Hero” Yodsanklai IWE Fairtex is back in action in a Muay Thai contest against Ukraine’s Sasha Moisa. Both Yodsanklai and Moisa were participants in the ONE Featherweight Kickboxing World Grand Prix, which concluded recently with Italy’s Giorgio Petrosyan being crowned the tournament champion.

In a kickboxing contest with 10-ounce gloves, former K-1 World Champion Enriko “The Hurricane” Kehl of Germany will face Armen Petrosyan of Italy. Both Kehl and Petrosyan joined the stacked featherweight division of ONE Super Series to compete among the best strikers in the world. A victory here for either would no doubt push the winner higher up the rankings.

Baars remains undefeated in 49 Muay Thai contests, owning an impressive 46-0-3 record with 16 of those victories coming by way of knockout. The most notable win in Baars’ stellar resumé is a unanimous decision victory over multiple-time mixed martial arts World Champion Cristiane “Cyborg” Justino.

Phogat is a champion wrestler and top women’s mixed martial arts prospect who comes from a family of martial artists. She began training in wrestling at the age of eight under the guidance of her father, Mahavir Singh Phogat. The 2016 blockbuster Indian sports film, Dangal, was loosely based on Phogat and her family.

China will also be well-represented on the ONE Championship global stage for mixed martial arts competition.

Bout cards and order are subject to change.