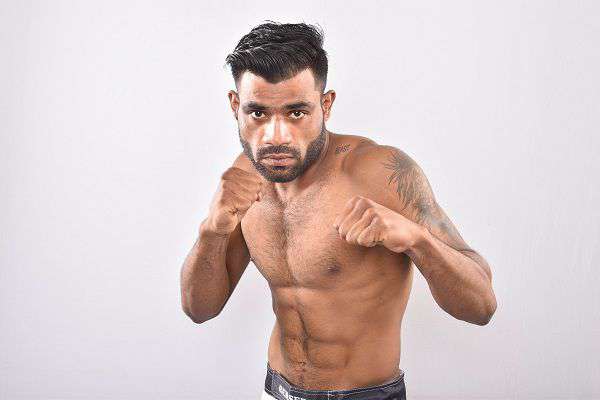 Bharat Kandare will create history on November 25th 2017 as he becomes the first ever Indian to fight in the UFC. Kandare is one of the most popular Indian MMA fighters. Training out of Super Human gym, Kandare has been a part of MMA since its very inception in India. Ahead of the big day, the former SFL featherweight champion took some time out to answer a few of our questions.

Paarth Pande: What got you into combat sports? What is your combat sports background? What is that one thing you love about combat sports which gives you the strength to move forward?
Bharat Kandare: My background is in wrestling. Since my career wasn’t moving ahead in that direction, I decided to switch to MMA. What kept me going is the opportunity to make this a career. As I kept fighting and moving ahead, I earned the money to lead a better life for myself and my family. That truly kept me going. And now the icing on the cake is the UFC contract.
PP: Who was your influence? Who is your favorite fighter? Why?
BK: Bruce Lee is my inspiration.
PP: When you look behind and realize that this is how far you have made how does it feel? What according to you is your greatest achievement?
BK: Well, I certainly have progressed. But I never let that go to my head. This is just the beginning. We have just entered the gate, now we got to progress slowly and make a true mark for myself. My greatest achievement is yet to come. Getting that bantamweight belt around my waist will be my greatest achievement.
PP: MMA is a relatively niche sport. Did people around you support your decision of taking this sport as a career? What are the biggest challenges that you have faced?
BK: Agreed, MMA is a very niche sport in India. Initially my family didn’t support me. But as I progressed, their mindset changed and now they do. That’s all I need. I have faced many challenges; we’ll keep that for another day.
PP: You became the first ever Indian fighter to sign with the UFC. How does it feel? What is your long term aim? Do you feel any additional pressure because of the gravity of the stage?
Bk: It’s obviously a big moment for me and my team to be the first Indian crew in the UFC. My long term aim is obviously to have the bantamweight belt around my waist, but first I need to see the smaller picture and get the W in my debut fight. I try not to let the pressure get to me; my team handles that section very efficiently.
PP: You last fought on Brave 5 in India and lost the fight via round 1 submission. What are your thoughts on your performance? What went wrong? Someone getting a UFC contract after a loss is unheard of, was this fight pre planned?
BK: I was a part of the UFC development program. I thought I did well there and earned the Brave contract. I went to Thailand for a month long camp and tore my ligament a week before the fight. I didn’t want to back off and took the fight. It’s no excuse. It is a loss and a hurting one. I’m glad the UFC understood my potential and spoke to my team and they decided to give me a shot at Shanghai. It wasn’t pre planned.
PP: You have been a part of MMA since its very inception in India. What are your thoughts on the position of MMA in India? Do you think it can be a popular sport?
BK: I’ve been involved with the sport for a long time. MMA is a niche sport as of now but has the potential to grow. With my inclusion in the UFC, I am sure their fan following will grow. This is only going to help the sport.
PP: You trained at Jackson-Wink MMA. How does it feel to train with the best fighters on the planet? What do you expect out of yourself from this training? Do you plan to change your base camp to Jackson-wink?
BK: The camp at JacksonWink is obviously world famous for a reason. I learnt a lot from greats like Jon Jones, Holly Holm and the masters – Greg Jackson and Mike Winkeljohn. I have trained hard for this fight and will give my best performance in Shanghai. I certainly plan to return to Albuquerque soon.
PP: You will be facing a new opponent,Yadong Song. What are your thoughts on him as an opponent? How do you see the fight going?
BK: My opponent got injured. I now have a new opponent – Yadong Song. Even my fight category has changed. I am now fighting at 145 lbs. Song is a tough guy. I need to capitalize on his weakness.
PP: You took this fight on a very short notice. Do you think this might hurt your chances? Is your body ready for the fight? Does taking the fight on short notice affect your confidence at all?
BK: I am always ready to fight. I stay decently in shape throughout the year. You never know when an opportunity comes knocking… and this time it is a big opportunity. I don’t have too many off weeks in my life and my body has adjusted to this pattern. In fact I am very confident coming into this fight. I’ve had a good training camp and believe in my abilities.
PP: What is the story behind your nickname?
BK: No real story behind the nickname. I used to take any fight at any weight category and people started calling me daring. That name stuck with me till date.
PP: Indian MMA fighters have in past faced lots of troubles. Complaints about not being paid at all for fighting, complaints about emotional torture from organizations, troubles from managing teams, and lack of support from everybody. As a fighter, have you faced any of these problems?
BK: Yes I have faced problems… many problems. But let’s not speak on that now. It’s time to move on and focus on my future.
PP: What is your message to everyone who wants to take MMA as a career?
BK: Stay motivated; choose a good training camp and a management team. Work as a unit. Your time will come.
Thanks for your time.