The inaugural episode of India’s Ultimate Warrior received a warm reception from the audience. The second episode of the breathtaking series opened up with 14 contestants after a couple of them got eliminated in the opening episode. The second episode focussed around the determination of the athletes. It was previously noted that each of the episodes follows a theme, which contestants are tested for.

These include Control, Determination, Focus, Survival, Balance, and Rites of Passage. They are governed by an ultimate Warrior Code, which forms the pillar for each of the unique episodes. Vidyut Jammwal who is the host of the show serves the role as the Dojo Master and at the beginning of the show, he stated that survival instinct is the key to ‘determination.’ 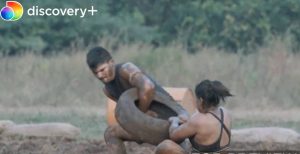 What went down during the second episode of India’s Ultimate Warrior?

Vidyut Jammwal, who has been well received as the host went on to encourage the athletes with a great story. He narrated the story of runners Abbey D’Agostino of the US and Nikki Hamblin of New Zealand helping each other after they fell down during the 2016 Olympics. Vidyut said that people who show determination and kindness are remembered, not those who win. However, he also teaches that ‘warriors do cry.’

The first course of the episode was the ‘Iron Palm Training’ also known as the Water Slapping task on the basis of which their mental toughness was judged. It was noted that one of the mentors, Shifu Kanishka had designed the task for the athletes and he also demonstrated the task to the athletes where they were required to slap the water out from the barrels by a slapping technique which will strengthen their palms and thus the name comes from it.

The second task was Murderball where four teams were in four corners. A tyre was thrown at the middle and two members from each team would come down to the middle to retrieve the tyre and get back to their own corner. This task would test their determination power, strategy and team performance. It was during the first clash, Sandeep Chauhan, who is a Taekwondo athlete ended up sustaining an injury to his leg. Then in the next round, a single member of the teams would represent.

The next task came up which was ‘False Finish.’ The contestants were instructed to run to the end of the road and get back to the starting point. The concept is that the athletes would think that they have finished the task but there lies ahead one after another task upon completion of the first one, which are even more difficult. This is another test to find out which athletes possess the determination power that the mentors are in search of.

After finishing up the sprint, they were again told to run but this time with a basket full of stones on their back and then after carried a heavy log. Meanwhile, Sandeep who suffered a leg injury did not back down and started to hit the first course on one leg with the help of his mentor, Shifu Kanishka. He also assisted Rounak, who was on her periods.

Next was Melee fight on water where the contestants would have close-range combat and they would need to shower continuous strikes on their opponents. In the end, an injured Sandeep Chauhan was let go by mentor Kanishka for the greater good in his upcoming endeavors. Muntazir Ahmad was also eliminated.