INITIAL BOUTS ANNOUNCED FOR ONE: LEGENDARY QUEST ON 15 JUNE 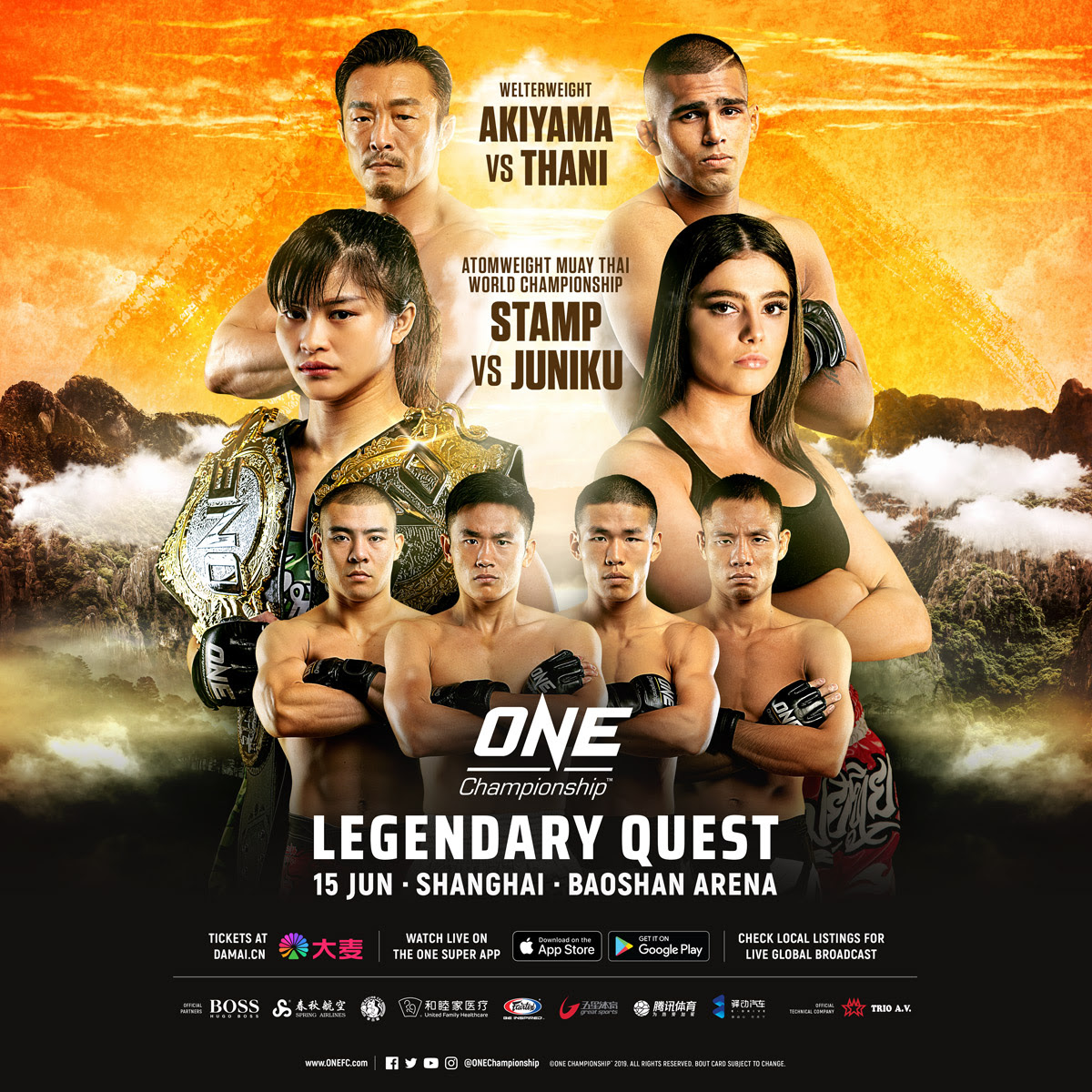 The largest global sports media property in Asian history, ONE Championship™ (ONE), has just announced the main event for ONE: LEGENDARY QUEST which takes place Saturday, 15 June at the Baoshan Arena in Shanghai. Reigning ONE Atomweight Muay Thai World Champion Stamp Fairtex of Thailand will defend her title against Alma Juniku of Australia.

Stamp Fairtex of Thailand is one of the most talented female martial artists in the world today.

Stamp began her ONE Championship run as a participant in Rich Franklin’s ONE Warrior Series. She competed in mixed martial arts and won her first professional bout by knockout in just 19 seconds. Leaving a lasting impression with her exceptional striking skills, Stamp was tapped to take part in the prestigious ONE Super Series soon thereafter.

Stamp now returns to action in the first defense of her Muay Thai title against Alma Juniku of Australia.

Set to make his highly-anticipated ONE Championship debut, Asian mixed martial arts veteran Yoshihiro “Sexyama” Akiyama of Japan will face Agilan “Alligator” Thani of Malaysia in the co-main event of the evening.

Known as “Sexyama,” he made his mixed martial arts debut in December 2004 and used his world-class judo stylings as his base. That has led to remarkable success, defeating some of the industry’s most respected names including Melvin Manhoef, Alan Belcher, and former IBF Heavyweight Boxing Champion Francois Botha.

Former ONE Welterweight World Title challenger, Thani is one of the most remarkable athletes Malaysia has ever produced. Ever since making his debut as an amateur, the man they call “Alligator” has torn through the competition.

The top contender trains daily at Monarchy MMA in Kuala Lumpur under well-respected Belgian BJJ coach Samir Mrabet, but also regularly travels to the United States to sharpen his skills at the world-famous Team Quest.

2-time SUPERKOMBAT Heavyweight World Champion Tarik Khbabez of Morocco will go head-to-head with Brazilian National Kickboxing Champion Anderson “Braddock” Silva in a ONE Super Series Kickboxing showdown. Both Khbabez and Silva are known for their knockout power and aggressive styles, which promises non-stop action from start to finish.

2-time European Mixed Martial Arts Champion Reinier De Ridder of The Netherlands will look to keep his unblemished professional record intact when he takes on former Aspera FC Middleweight Champion Gilberto “Giba” Galvao of Brazil. De Ridder made his ONE Championship debut last January at ONE: HERO’S ASCENT, defeating Fan Rong by first-round submission. Galvao, meanwhile, was last in the ONE Circle in March of 2018, defeating American middleweight Jake Butler.

Han previously competed for the ONE Bantamweight Muay Thai World Title last January at ONE: CLASH OF LEGENDS, but fell just short of victory to Thai legend Nong-O Gaiyanghadao. He now returns to his homeland of China to jumpstart another run at the World Title.

Miller, on the other hand, is a WKA British Champion who most recently competed in Jakarta at ONE: FOR HONOR, where he defeated Malaysia’s Mohammed Bin Mahmoud by unanimous decision.

The 26-year-old Matsushima is one of the fastest rising martial artists from Japan. Hailing from Kanagawa prefecture located in the Kantō region of Japan, Matsushima has put together a handful of solid performances while competing in local Japanese martial arts promotions Pancrase and Shooto. In his ONE Championship debut last September, Matsushima scored a stunning first-round technical knockout victory over former ONE World Champion Marat Gafurov, announcing his arrival on the global stage of martial arts competition.

Meanwhile, Korean mixed martial arts prospect Kwon has also made waves during his time so far in the promotion. With highlight-reel knockouts of Anthony Engelen and Eric Kelly, Kwon now faces his toughest test to date in Matsushima.

Former WMMAA Champion Fan Rong of China is set to perform in front of his countrymen when he takes on Sherif “The Shark” Mohamed of Egypt in a middleweight mixed martial arts contest.

Fan made his ONE Championship debut last January, and is eager to tally his first victory with the promotion. Mohamed is looking to do the same as both warriors lock horns at the center of the ONE Championship ring.

Training out of Equilibrium Beijing, Chen has shown incredible potential during his time so far in ONE Championship. This includes an impressive run with four scintillating finishes since his promotional debut in May of 2017.

Engelen, on the other hand, is one of the most talented featherweights in the promotion. The majority of Engelen’s victories have ended in exciting finishes. He will look to return to the winner’s circle with a victory over Chen Lei.