Interview: Cody Garbrandt takes a swipe at T.J. Dillashaw, says he doesn’t believe in what he says 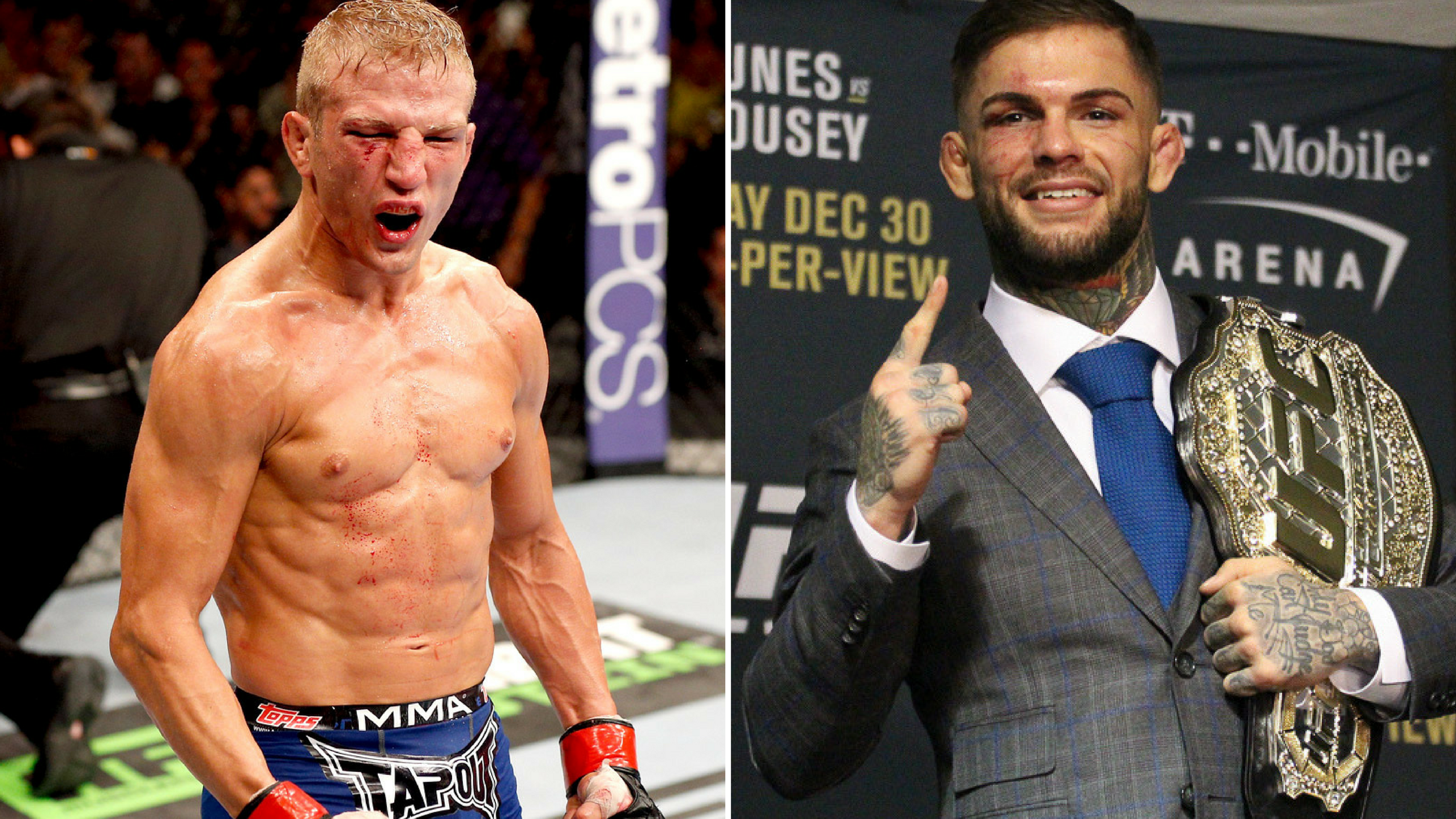 UFC 217 is almost upon us, with a stacked card that would almost give UFC 205 a run for its money. While the hype surrounding the main event might not be the same, the PPV will witness three title fights, as the prodigal son, Georges St – Pierre returns.
However, many believe that the headliner should’ve been T.J. Dillashaw – Cody Garbrandt, as Cody defends the title he won last year against Dominick Cruz. Cody outclassed Dom in all areas, proving that he isn’t all hype, and did something his mentor wasn’t able to do.
The fight between Cody and Dillashaw has been years in the making, with Dillashaw initially training out of Team Alpha Male. However, discontent quickly crept in, and T.J. left Team Alpha Male on bad terms. The fight between T.J. and Garbrandt is personal, and while both men have been continually throwing barbs at each other.

We caught up with both men during the recent UFC 217 conference call, as Cody Garbrandt explained how Urijah Faber and Justin Buchholz helped him in preparing for Dillashaw, someone they are extremely familiar with.
“Input? Yeah, all my teammates know; they built T.J. up to where he is at”, Cody told us. “They know T.J. like the back of his hand. They got me ready for Dominick Cruz. They went countless hours, 27 rounds with Dominick Cruz, so they knew him.
They taught T.J. everything. Justin Buchholz, and the camp – this whole camp, and the last year we’ve been preparing for TJ, getting ready for this guy. Justin shows me how T.J. throws a punch, and I throw a punch. So I’m certainly confident knowing T.J. when I get in there, knowing his reads and everything.
I’ll fight him and we’ll go from there. Yes, Urijah has been a great mentor, and has been hands on in this camp as well, for getting me ready for T.J.”

Garbrandt on if he performs better when he’s emotionally charged

Cody’s demeanour leading up to the Dominick Cruz fight was anything but stoic, as the then challenger nearly came to blows with the former champion. However, while everyone thought Cody would be too emotional, and would get caught with his emotions running out of control, Garbrandt put on a striking clinic, outclassing the former bantamweight champion.
While the emotions are running high this time around as well between Cody and Dillashaw, the current UFC Bantamweight Champion made it clear that he could shake hands with anyone after the fight.
“You know what? No. I can fight emotionless, emotionally… anything. I love fighting. I was born to fight. I was really put on this earth to fight. And that’s what I’ve done successfully in my life, to fight and get to the top. You know what I mean?
I really scratched my way to the top from bottom, and emotional or not emotional, I can get in there and be friends with the guy. Takeya Mizugaki didn’t say one bad word about me, and I went in there to fight, and do what I had to do to climb the ranks and get a title shot. Now I’m the world champion.
So, it doesn’t bring any extra anything to me, going into (the fight). I don’t lose my focus; my focus is on the line. T.J. is saying this and I’m saying that. I’m going to believe what I say, and that’s the difference between me and T.J. I believe what I’m going to do, T.J. hopes he believes what he is going to do to me.”

T.J. says he is more technical, and is smarter than Garbrandt

Dillashaw however, refused to get baited into the discussion, and said the greatest difference between himself and Garbrandt is that he is more technical, and is smarter than his opponent for UFC 217.
“Technically, the way I fight. I’m a lot smarter, I’m a lot more technical. I just feel that I’m a lot more smarter, and a lot more technical.”
Cody however wasn’t buying the explanation, and joked if Dillashaw was regurgitating the same words Dominick used before their fight.
“Is this TJ or is this Dom talking? Because it’s the same sh*t Dom said during the lead up to the fight. You just stole his lines from last December.”
Dillashaw also made it clear that he could fight Cody wherever he wanted to — on the feet or on the ground.
“My take is, that’s why I am who I am. I can tell him today that I can take the fight wherever I want.”
Cody retaliated by saying Dominick had taken T.J. down five times during their fight. “Besides, Dom took him down five times.” 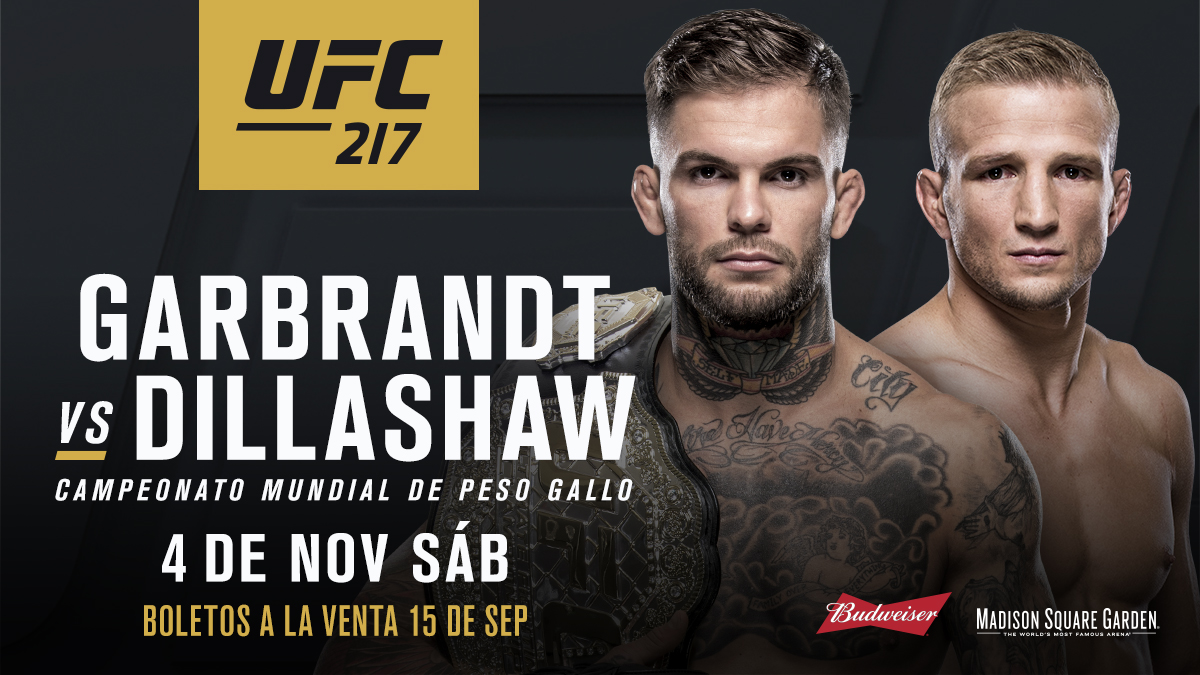