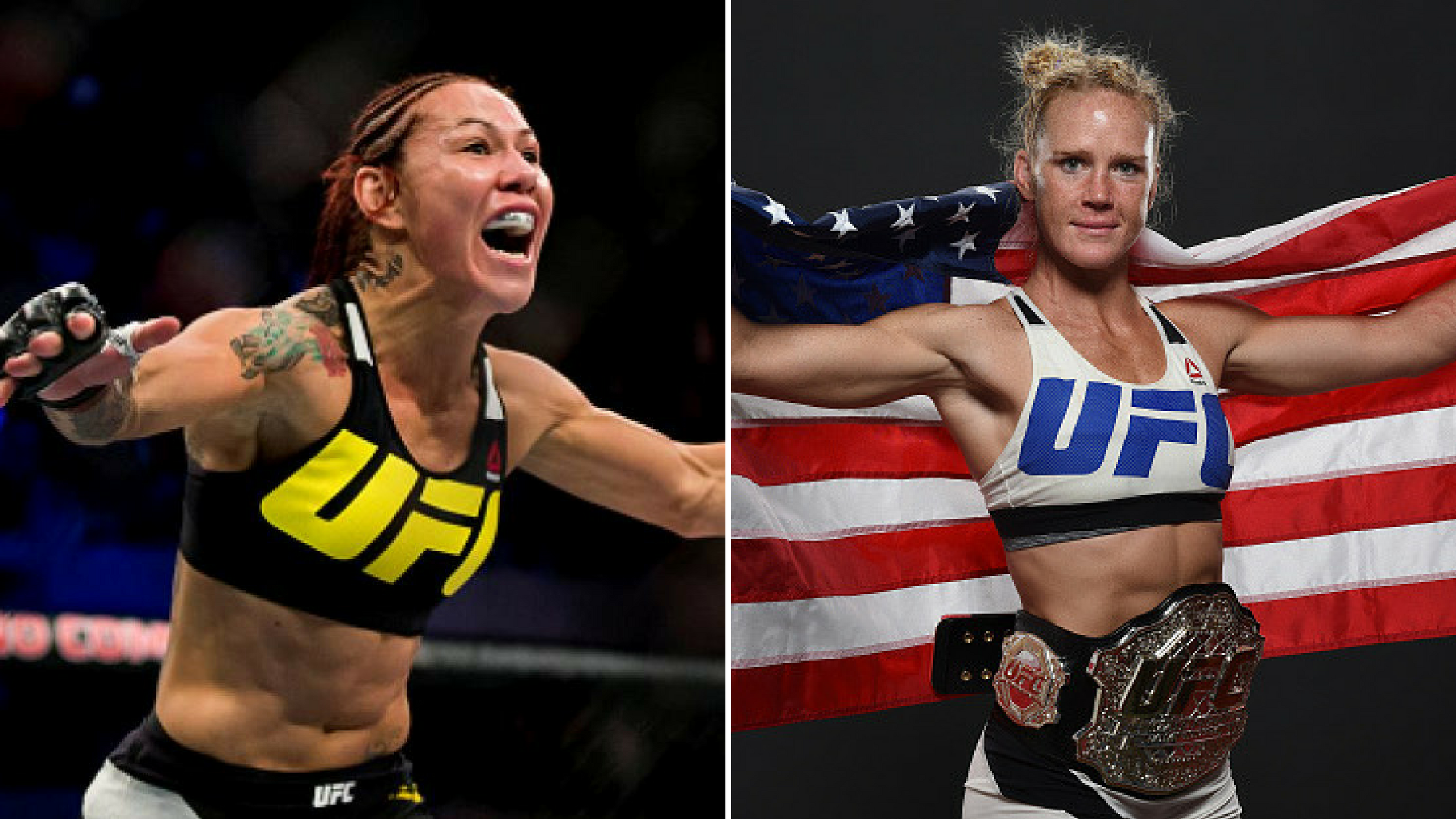 UFC 219 is just around the corner, and the final PPV of the year promises to be a barn burner. Cyborg finally has her sights set on a former UFC Women’s Bantamweight Champion, although her name isn’t Ronda Rousey.

In the co – main event, Khabib Nurmagomedov faces lightweight contender Edson Barboza. Khabib lobbied for a rematch with Tony Ferguson going into UFC 219, but will face the lightweight standout in what will essentially be a title – eliminator.

However, the focus is firmly on Cris Cyborg, and how she fares against Holly Holm. Holly shocked the world at UFC 193, when no one gave her a chance going into the PPV. Holly defeated Ronda in one of the biggest upsets the sport has ever seen, and that will fuel ‘Cyborg’ to perform better against the former world champion.

We caught up with both the women heading into UFC 219, and Cris opened up about the biggest that never was — her fight with Ronda.

The UFC Women’s Featherweight Champion, for many years, lobbied for a fight with Ronda Rousey. However, Holly shattered Ronda’s invincible aura in Melbourne, and Cyborg told me that she knew, on that day, that she would soon fight ‘The Preacher’s Daughter’.

“When Holly fought Ronda (at UFC 193), I watched the fight”, she told us. “I had just met Holly before, and we moved together. Me and Ronda, we always had a hard time agreeing to fight each other, but she always talked, and never wanted to fight me really. I watched that fight that day, and she (Holly) did really amazing during the fight.

One of the factors that contributed to the fight never happening was the fact that Cris had difficulty cutting down to 135 lbs. The discussions for the highly anticipated super – fight never took off, with Cyborg refusing to cut down to 135 pounds, while Ronda never showed any interest in going up a weight class.

However, Cris opened up about her problems with cutting weight, and said she feels better now than ever before.

“My weight is really good now. I’m happy about it. After my last fight in July, I kept training, and I went to Thailand and I kept training. I was on vacation, but I kept training everyday. And I was watching my diet, and so that I won’t have a hard time making 145. I’m really happy; I worked with Rob Emerson, and he has helped me in my cuts down to 145. And I’m really lighter than before.

Before, I used to walk at around 180 or 185, but now I walk at like 170 lbs. It’s very different from before. Now, I work every morning, and I’m getting better each day, but I’m really happy with my weight now.”

While Cyborg, in all objectivity, is the greatest pound – for – pound women’s fighter of all time, in Holly Holm, she faces one of the most distinguished opponents of her career. When asked if she thought her fight with Holly Holm was going to be the toughest fight of her career, Cyborg responded by saying she was going to show a diverse range of skill – set than she has ever before.

“I don’t… I think this fight is going to be great. I think Holly has great experience. It’s hard to say if I think this is going to be the hardest fight. I’ve had a lot of wins in my career. Maybe I can do lot more fights, and have more young girls coming in to fight.

But I think it’s going to be a nice fight, and I think it’s going to be a different fight. Maybe in this fight, I can show more of my game. People just know me when I’m fighting just a little bit. I have a brown belt in jujitsu, I’m a two time world champion. I have wrestling, so that’s something I can show. Maybe Holly can give me the opportunity to show that bit of Cyborg.

I think this is going to be amazing because of that. This maybe hard or not, that we will know after the fight. But there aren’t a lot of girls that can fight you.”

Holly Holm talks about exorcising her demons, and what version of Cyborg she is preparing for 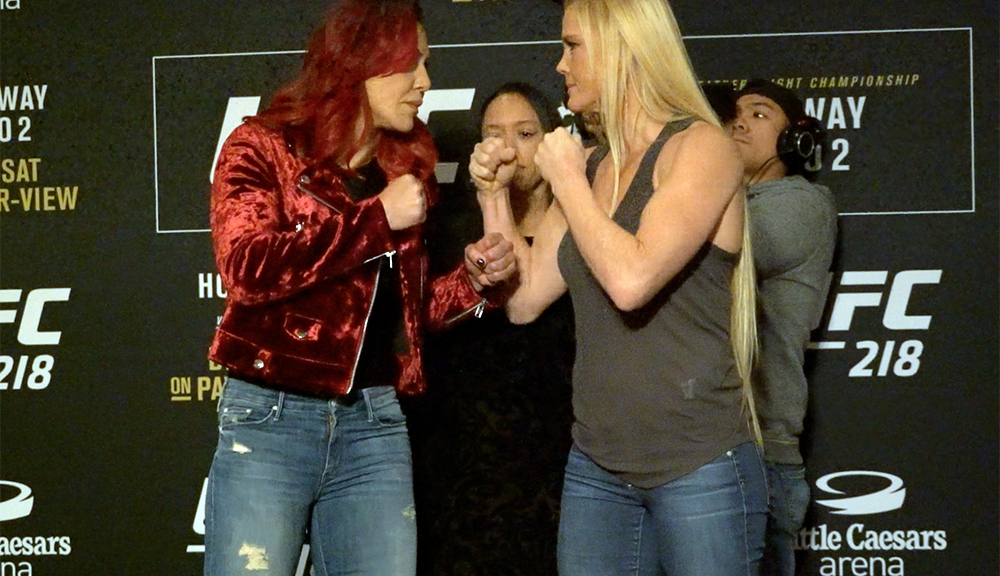 The challenger, Holly Holm hasn’t exactly had the greatest two years since beating Rousey in Australia. Before fighting Bethe in Singapore earlier this year, Holly dropped the title to Miesha Tate, before suffering back – to – back losses at the hands of Valentina and Germaine de Randamie.

While her fight with Germanie was controversial — putting it mildly, Holly talked about the importance of getting back to winning ways against Bethe.

“It was good to get a win back under your belt. I know that Cyborg is still a different fighter than Bethe was. So it was nice to get a win under my belt, I knew I was capable of it. But I want to keep on that.

Going through the three losses definitely took a toll on me, but I know it’s not that my losses were – like I totally got dominated. They were all their own situation, and I just let them be learning experiences to better myself for what’s to come in my future.”

When asked about the stylistic match-up, considering Cyborg has always been aggressive, while Holly thrives on movement and counter – striking, the former UFC Women’s Bantamweight Champion explained that she was preparing for all versions of Cyborg come fight night.

“I think that… yes, she has always been really aggressive in her fights, and she’s a strong opponent. And it can be a very intimidating type of fight. She might come in aggressive or she might not. We’re going to be ready for either one. A lot of people, when they’re training for a fight have their own game plan. She’s got her thing she has been working on, and I have got mine that I’ve been working on.

I’m just ready to kind of perform what we’ve been working on. It’s not like we’re going to train this whole camp (thinking), “Okay, she’s aggressive, so she’s going to come forward and let’s just do this.” She might want to stop and counter. She might want to move more, work on her clinch more, wrestle more.

There’s a lot going on in an MMA fight, and we’ve been training to be ready for any of those situations.”