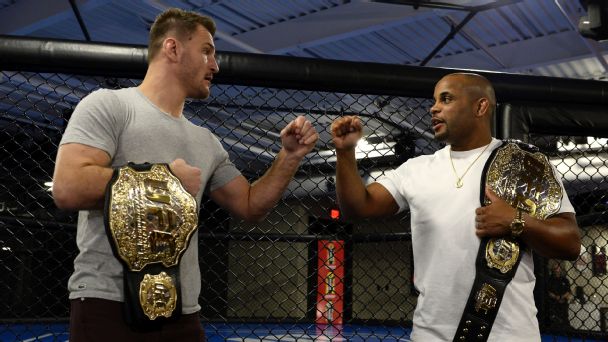 Cormier talks about making history at UFC 226, says Stipe is not the greatest heavyweight

Daniel Cormier might never be able to completely wash off the stink of losing two fights to Jon
Jones, but the current UFC Light Heavyweight Champion can become the first man in UFC history
to hold the light heavyweight and the heavyweight titles simultaneously. The main event of UFC
226 will see two men chasing history, as Stipe Miocic looks to cement his place as the most
dominant heavyweight champion in UFC history.

There is mutual respect and admiration between the two men, who will throw down for the
undisputed heavyweight championship, something which is very different from what Cormier has
experienced with his other ‘big fights’ in the light heavyweight division against Jon Jones. However,
both men are focused, and a week before arguably the greatest heavyweight show down in UFC
history, both Cormier and Stipe talked about the importance of their fight.

DC has been vocal about how he should be considered among the greats in the sport, and with a
win over Stipe, DC will do something no one else has ever done before in the heavyweight
division. The UFC Light Heavyweight Champion also delved into the G.O.A.T discussion, and said
that with a win over Stipe, he should be ranked amongst the very best in the business.

“I think I am”, DC said when asked about being considered the greatest of all time. “I mean, I don’t
believe anything else should be thought of. I mean, I should be in the conversation. Any time a guy
does performance enhancing drugs — and multiple times, they need to eliminate themselves (from
the discussion). So, as great as Anderson Silva was, he tested positive, I think two or three times.
So those guys eliminate themselves.

I want to be mentioned among the greats – the George St. Pierres and the Demetrious Johnsons –
the guys that have done things the correct way over the course of their entire careers without that
asterisk. Because when you have performance enhancers tied to your name, man, there’s no way
around that.

There’s no way around it, and I think that of all the sports, the people that pay the harshest price is
the baseball players, because when you have (something) negative tied to your name, they deny
you the ultimate vindication. The ultimate goal for the baseball players is to go into the Hall of
Fame.

And these guys aren’t even getting close, because they have those bad things tied to their names.
And I think as a sport, MMA needs to evolve to a point where the punishment for having those
things, doing those things, is for your name in the sport to be challenged, and should be
questioned.”

Daniel also mentioned that his fight with Stipe would be the biggest fight of his career, leaving the
talk about his rivalry with Jon Jones behind him.

Stipe only focused on the fight, and not around the talk leading up to it

While the narrative surrounding the fight is about Cormier creating history, Miocic has done
something remarkable himself. The UFC Heavyweight Champion plans on holding on to the title for
the foreseeable future, and said he’s only focused on his fight with Daniel.
“DC has fought the best in the world, he has beaten the best in the world. Fighting him is going to
be amazing, I’m super excited. Just the match up and what ever is on the table, people are excited
for UFC 226 like I am.”
“I’m used to it. I’m not worried about it”, Stipe said, acknowledging the hype going into UFC 226.
“I’m just worried about my fight, that’s all I care about. I’m not going to change. I’m here to fight, I’m
a fighter. That’s what I signed up for.”