Traditionally from a Wrestling background, Ehtesham Ansari is a 2019 National Gold medalist and a Silver medalist at the GAMMA Nationals.

The MMA India Show had the opportunity to chat with Ehtesham Ansari to talk about his life in Dagestan and also his experiences training in the Russian Republic. 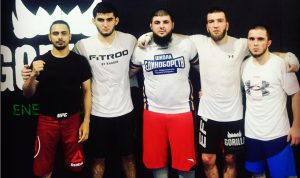 When did you visit Dagestan?

“I reached at 27th September”

Where did you initially trained?

“In India I started training in Delhi at Knockout Fight Club under Mannan R Datta”.

Tell us about your Martial arts background and the achievements

“My background is wrestling. Before that I participated in the Nationals where I won Gold. I won Silver in Gama National. Till date, I’ve participated in four competitions in total and  which I’ve won a Gold and a Silver.”

So you’re training in Dagestan in Khabib’s gym. What are the differences you found while training there?

“The techniques are very different here. The athletes are very strong. People say physically they are strong but I didn’t feel that. But the technical aspect is pretty strong. Their training schedule is also different.”

Tell us the details of your training schedule

“Basically, the warm-up itself is very exhausting. The warm-up is also wrestling-based. The warm-up is amazing. The sparring they do is also pretty technical and cautious. Even if I do sparring for 10 years, it won’t cause any injuries. The problem with Indian athletes that they think sparring is a fight where the athletes injure their fellow training partners. Here we try to keep ourselves and our partners safe and the training regime is smooth. The sparring is done every day but stiff sparring will lead to injuries.”

“We have a dorm here. I stay in hostel and Khabib’s gym is ten minutes walking distance.”

Are you facing communication issues due to the language barrier?

“Yes. There is a huge problem with the language barrier. Nobody speaks English here.

So how are you dealing with the issue?

“I usually use Google Translate and I’m learning Russian language. I speak a little bit of the language to communicate. The words which I don’t understand I translate them.”

A few months back we spoke to Mohammed Farhad who competes in Brave. He had also gone to Dagestan for training. He said that the Olympic-level training standard in India is similar to the training in Dagestan. Do you feel the same?

“The athletes are technically very strong here. Even when I train with amateur trainees here, I fail to win. They are pretty strong. So you can understand that pro fighters are likely to be even more stronger than them. “

Are you only sparring there or you are also focussing on striking?

“I’m doing proper MMA training. I also train at Abdulrashid Sadulaev’s wrestling academy two days a week. A lot of trainees go there and training is according to several weight classes. Athletes can train according to their needs whether it’s wrestling or any other aspect of MMA.”

Where are you located in Dagestan?

“I’m in the capital, Makhachkala.”

In India, many aspiring MMA fighters are inspired by UFC stars like Khabib and Conor McGregor. Can you share the procedure for the aspiring athletes who want to visit Dagestan?

“A visa permit for a longer duration is difficult to get. I had a conversation with my coach about wanting a training period for longer duration. The coaches here don’t get the time to train a huge number of athletes. But, coaches can personally invite. However, that would be also for three months. Athletes can get Business Visa and train here for three months. The first time I visited the gym here, the security guards sent me back before saying that the gym is already full. My friend here, Islam had helped me to have a word with the coach. The next day, I came here with one of my Russian friend who helped me get the admission. I was asked basic questions regarding my accommodation, food and the language barrier. I paid the fees and got the membership card for training.”

You also recently signed a four-fight deal with Naiza Fighting Championship, please tell us something about that?

When I visited Dagestan last time, I had a friend who was competing in Naiza Fighting Championship. I told him to put in a good word for me and eventually I had gotten a fight, but unfortunately the fight got postponed as my opponent suffered an injury. But when I returned back to Dagestan again, the promotion contacted me and offered me a four-fight contract. I will also be getting four-fights a year and I will be getting a pay increment of $1000 after every fight.