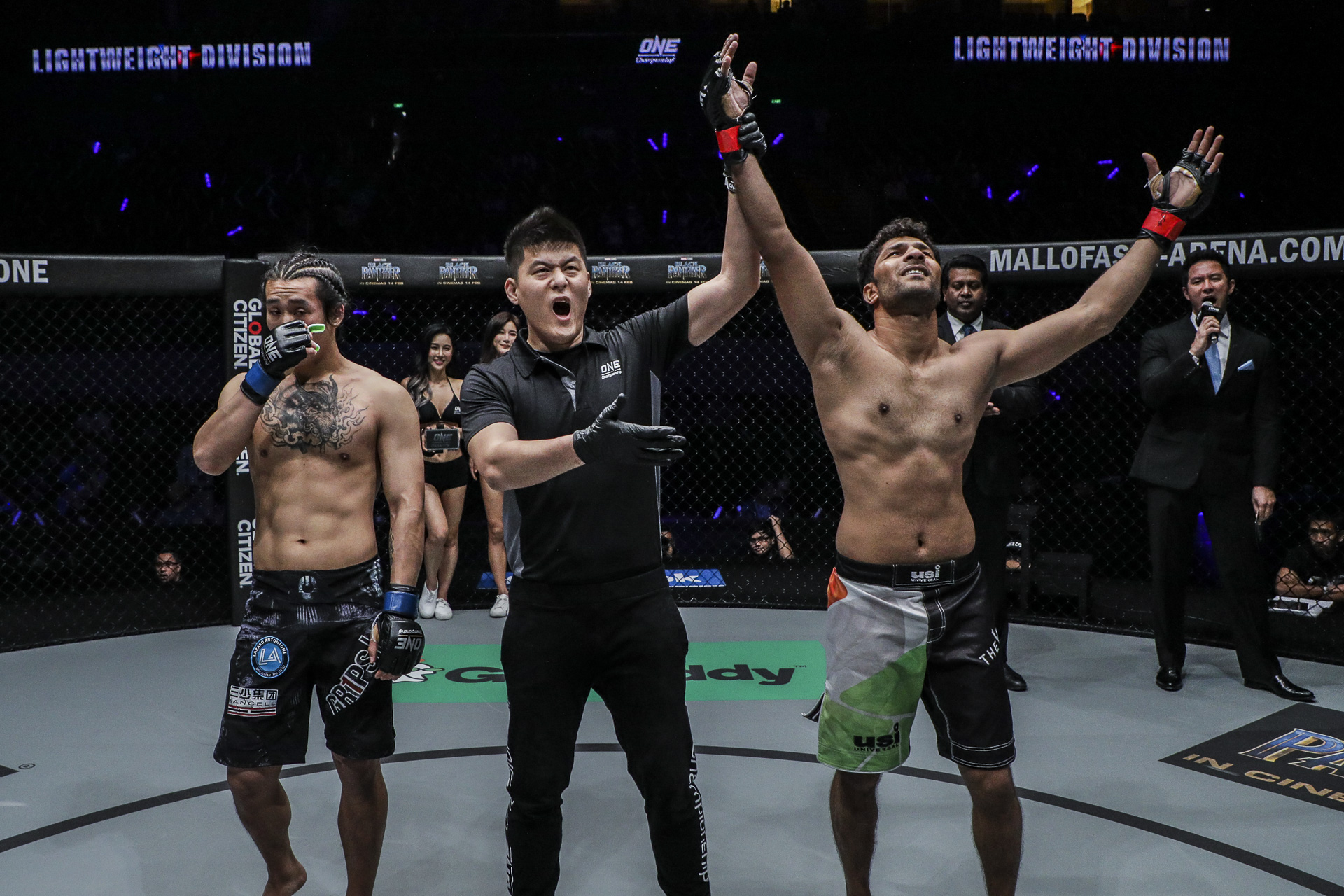 After putting on an exciting card in Jakarta, ONE Championship went to Manila with yet another stacked card. ONE: Global Superheroes also witnessed Rajinder Singh Meena competing on the prelims card, as he faced Chinese prospect Zhang Ze Hao. Ze Hao came into the fight with an unblemished 2 – 0 professional record, with his last victory coming against yet another Indian, Bala Shetty back in November.

Meena was coming off six consecutive losses, and found himself in a bad predicament. He knew that all it took was one good shot, and he could get back to winning ways, and that was exactly what happened just an hour ago! Meena connected with a beautiful right hook, sending his opponent crashing to the mat, and Meena finished the fight via guillotine choke.

We caught up with Meena just moments after the fight, and the Indian was understandably ecstatic about his win.

“No, absolutely not”, Meena said, when asked if he had foreseen a finish in the first minute of the first round. “The only thing on my mind was to finish the fight as soon as possible. Because, the longer the fight went, it would go to the ground. And my ground game is a little on the weaker side, because I come from a boxing and wushu background. So it was a conscious effort on my part to finish the fight as soon as possible.”

Rajinder’s win also comes at an ideal moment. The day we celebrate our Republic Day, Meena became the first Indian male fighter, to secure a victory in one of the top global MMA organisations.

“It felt great! And that too, representing India during our Republic Day, and after suffering six consecutive losses! ONE Championship is one of the biggest platforms for MMA in the world, and the biggest in Asia. So winning a fight here is a big deal, and that too on our Republic Day – it felt fantastic. It’s a gift to my country from me on this day.”

Meena suffered a 6 fight skid, after signing with ONE Championship in 2015. While he lost two fights in the SFL, Meena lost his first four fights in ONE.

“This win is very important for me”, an understandably emotional Meena told us. “Because, after 2015, just when I was recruited by ONE Championship from India, my record was 8 – 1 (wins – losses). After that, I’ve been handed loss after loss – two in the SFL, and four in ONE Championship. I felt embarrassed, knowing that I was representing the nation on such a big stage, and I just couldn’t win.

This impacts the growth of MMA in India, with other countries watching this world spectacle. So, just the image of India in their eyes – it doesn’t look good. They think the fighters in India aren’t good, and they don’t give us the chances we deserve. But the fighters in India can cut it; the sport of MMA in India is growing, but the biggest hurdle in India is the lack of proper coaching.”

Meena then delved into the challenges Indian fighters face, and talked about how there isn’t a proper MMA gym for the fighters to train out of, and compete in the biggest MMA promotions on the planet.

Rajinder admitted that he wasn’t too confident on the ground, but when the opportunity presented itself, Meena was quick to pounce on the opening. However, he said he was also cautious about taking the fight to the ground.

“So when the fight went to the ground; when we were trading punches, when were connecting with our crosses, I connected with my right hook, and it landed flush on his chin. So when he hit the mat, I thought of continuing to attack him. I knew he wanted to take the fight to the ground, and once we hit the mat, and the moment I started cranking his neck, he did try to get out of the hold.

But I did spend some time doing BJJ at Crosstrain – the gym I train out of, so I did dabble in BJJ. So I managed to position myself properly, and I could feel that the guillotine was synched in. So I did have confidence in locking it in deep. But I did fear that he would wiggle out of the hold, and then he would be on top in the mount position. I knew that it would be the defining moment in the fight, and if he got free, he would be in the mount, and would rain down with punches.

I lost most of my fights that way. But I also knew that it would be the defining moment, and that I could finish the fight then and there.” 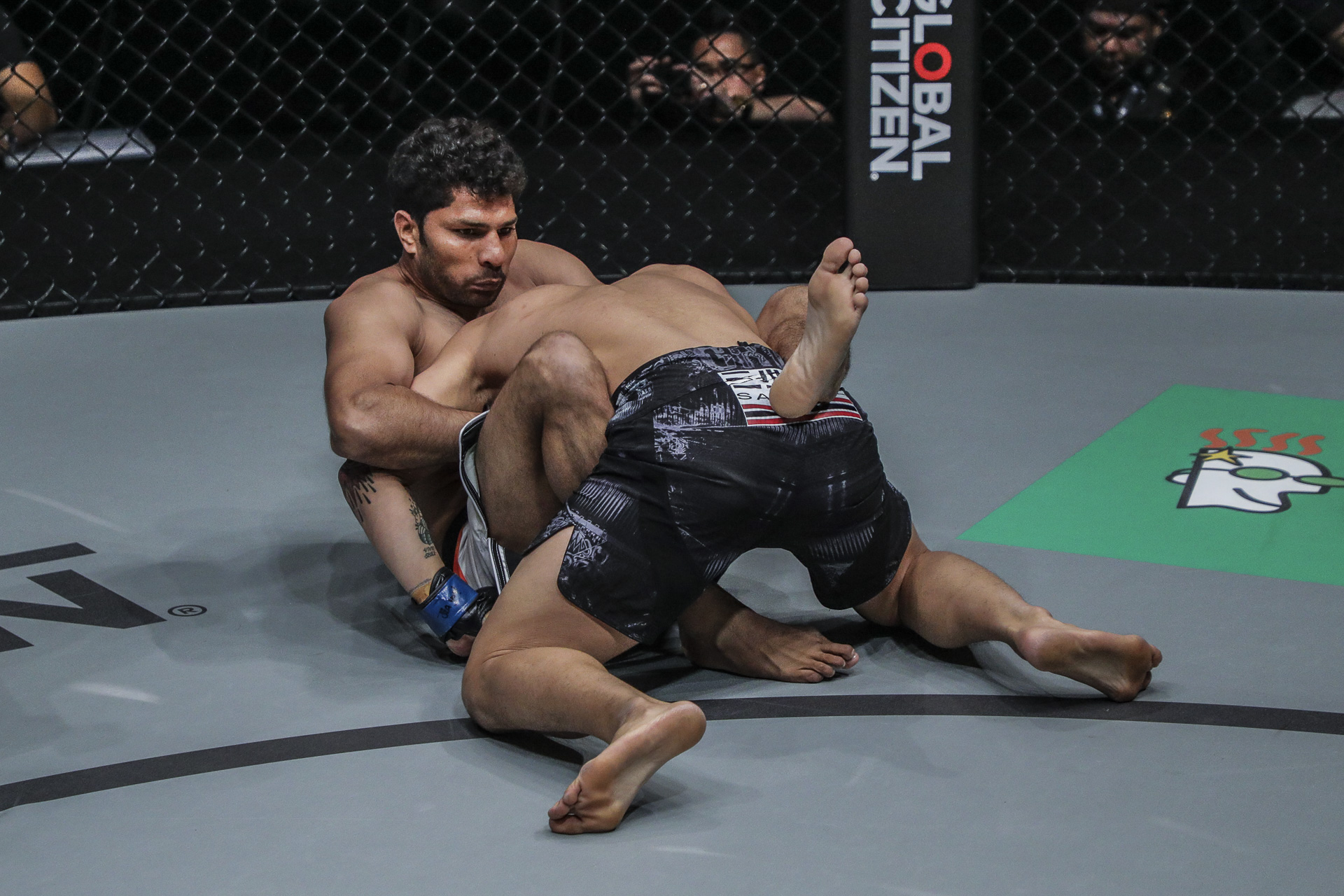 At a time when quite a few Indian fighters are going abroad for training, Meena said he trained out of few gyms in Delhi. Meena also mentioned that he had his camp in India, and did not go abroad for the fight camp.

“Before the fight, I trained – I have a job in CRP, and that’s where I trained for the fight. I also trained at Crosstrain, I trained in a gym that’s close to my house called Addiction. I have a couple of boxing partners – sparring partners, who helped me for this fight. Considering my background is boxing and wushu, I focus more on my standup. I also roll (BJJ) once or twice in a week. But I don’t go frequently, as I’m not used to jiu jitsu.

So my training camp happened in India. I did not go abroad for my camp (for this fight).”

The Indian lightweight also mentioned that most of the ONE officials and crew immediately congratulated him after his win, and said his win was long time coming.

Meena said he did not suffer any injury – major or minor from the fight, and is raring to go. He also had a message for the Indian fans, and talked about the importance of self belief and confidence – two things most of the Indian fighters lack.

“No, I’m completely unhurt. There wasn’t even an instance where I would’ve gotten hurt, so I’m 100% coming out of the fight.

I just want to tell the Indian fans to train hard”, Meena added. “We aren’t behind anyone; the interest levels and the skills we possess – we aren’t far behind those abroad. We just have to get the right training, and improve our confidence levels. If we manage to increase our confidence levels, we can beat any fighter from any part of the world.

It’s just our psyche; we aren’t confident to fight others from different parts of the globe. That’s the major reason why we lose. As we’ve seen, the moment Sushil Kumar won an Olympic medal, we started believing in ourselves. We then thought, “If he can beat them, why can’t we?” So it’s just about our confidence and our convictions. Otherwise, there isn’t much difference between us (Indian fighters) and the international fighters.”

Previous articleRajinder Singh Meena picks up win at ONE FC Manila
Next articleUFC on FOX 27 Jacare vs. Brunson II: 4 Fights to Watch Out For