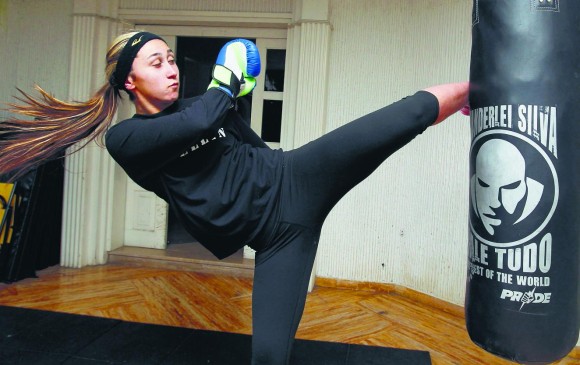 Sabina Mazo stands as one of the brightest MMA prospect today. With
a record of 5-0, Mazo gained popularity in the MMA community
because of her highlighting head kick knockouts. She in her last match
took on veteran Shannon Sinn in the co-main event of LFA 37 for the
vacant LFA women’s flyweight title. Mazo won the fight via unanimous
decision and managed to remain undefeated. Mazo is just 21 and has
already gathered a lot of attention. She is one of the most closely
studied prospects in MMA today and her being undefeated adds air
invincibility around her. Ahead of her next move, Mazo took some time
off to answer questions about her future, personal life, women in MMA
world and more.

Q. You now hold a record of 5-0. Does being undefeated add
pressure? Professional combat sports athletes in past have shown
signs of mental breakdown when they lose their perfect record. How
do you prepare for losses?
Ans. I don’t feel any pressure. I train regularly and keep my mind stress
free. I have one aim that is to give my best in every fight. As far as
losing goes I lose everyday at the gym. I know what a loss feels like and
am mentally ready for it. I love combat sports, I took up this sport
because I like getting punched in the face. I am not afraid of losing.

Q. In your last fight you faced Shannon Sinn. What are your thoughts
on your performance? You were earlier scheduled to face Silvana
Gomez. Did this change of opponent affect your game plan and
approach to the fight a lot?

Ans. I felt I gave a very dominating performance. It was a very technical
fight and I performed well. No the change in the opponent didn’t really
affect my game plan a lot. I just had to adjust some stuff. I guess as a
fighter I am always ready for a change in opponent.

Q. You are known for knock-out wins. Of your 5 wins 2 come via head
kick knockouts. Do you usually plan to go for knockouts? Your
highlight knockouts have brought you a lot of attention. Does this
attention at such an young age increase performance pressure?
Ans. Yes, I do train to finish fights but I don’t solely focus on that.
Knockouts are something which just come in motion. I don’t let the
attention bother me. I don’t think my age is a factor which affects my
performance. It’s not about when and what, the entire attention and
pressure is a part of the fight game.

Q. What is the story behind your nickname?
Ans. The Colombian Queen was known for being a drug dealer. Also the
majority state of Colombia is associated with the drug problem. I want
to change people’s idea about Colombia. I want them to know we can
be good at many things and reach the top of the world.

Q. Have you faced discrimination because of being from Colombia?
Ans. No, not really. It’s just that people talk. They hold stigma kn their
mind and I want to change that. And holding this stigma is not their
fault. Colombia has always been portrayed in this light. Hence, I
decided to use my voice to change their opinion.

Q. You’re still a student. What exactly are you studying? Do you plan
to continue with the course of drop it go focus on MMA?

Ans. I am doing my majors in nutrition. For now I plan on to do both
MMA and my course together. However, you might not know what
happens in future.

Q. You took a break from MMA in the year 2016. Why?
Ans. I took time off from MMA as I shifted my training camp to the
USA. I made this switch to grow as a fighter.

Q. As you have your training camp in the USA, you live away from
your parents. Does staying away from them affect your training?
Ans. Not really. I do miss them but they always come to my fights.
Hence, knowing that they’ll be there to watch me compete motivates
me even further. Moving here has brought me closer to them.

Q. People have time and again said that MMA  isn’t meant for women. What
is your take on this?
Ans. Go watch my fights.

Q. Women MMA fighters have time and again gone on record to talk about
how looks play a major role in their career. Fighters in past have even said
that promoters don’t support them because of not meeting their standards
of beauty. What is your take on the entire situation?
Ans. I feel it’s a part of the game. Beautiful women are promoted more.
However, I think attitude can change the entire situation. If you have the right
attitude fans will support you. I don’t allow this to affect me at all. It’s a part of the
game and you have to deal with it.

Q. What are your next plans?
Ans. I’ll go back to training in a week. Try to find something after Muay Thai
worlds in May.

Q. Will you be representing Colombia in World championship?
Ans. Yes.

Q. Does representing your country in world championship add some
emotional connection to the game?
Ans. Totally yeah. It’s an honour to represent your nation at a tournament like
that.

Q. UFC recently created a new women’s flyweight division. What are your
thoughts on it? If an opportunity comes will you compete in it?
Ans. It’s a very new and growing division. I guess it’s a platform for other fighters
to step up and show how great they can be.
I don’t know yet. I am ready to compete in the UFC but I don’t know when will I
get the opportunity.

Q. One of the most discussed topics today is fighter pay. What is your
stand on the situation? What are your thoughts on fighter union?
Ans. MMA is a really hard sport. It’s not the easiest way to earn money. So if
your aim is to earn more then you should change their attention to something
else. And as far as fight purse goes, it depends on negotiations.
Union is a complex topic. It’s not limited to one fighter. I am not educated enough
on the topic to comment.

Previous articleUFC: Gunnar Nelson has pulled-out of his fight against Neil Magny from UFC Liverpool
Next articleUFC: After walking over dead bodies in Afghanistan as a kid, Siyar Bahadurzada thinks 2018 would be his year, wants Robbie Lawler next