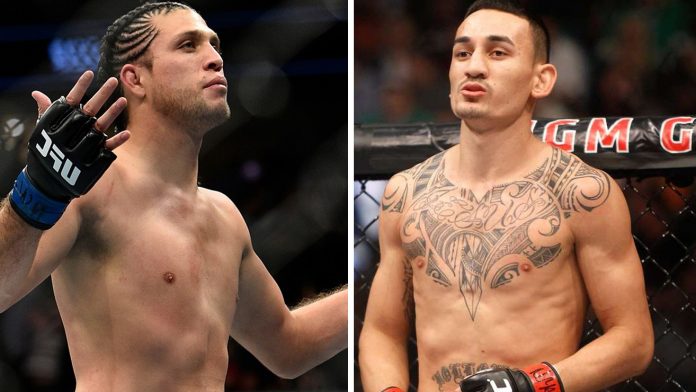 One of the most highly anticipated bouts will go down next weekend at UFC 226, as two titles will
be defended during the pay – per – view. The featherweight division has never been more open,
with Brian Ortega quickly climbing up the ranks to face one of the most dominant champions in
recent memory, Max Holloway.

Max defeated former featherweight kingpin Jose Aldo, to cement his status as the undisputed
champion, while Ortega rides on an undefeated streak going into the fight. Ortega has previously
defeated Cub Swanson and Frankie Edgar to earn his opportunity, while Holloway defeated Aldo in
back – to – back fights, putting an end to an era of dominance by the Brazilian in the division.

Heading into UFC 226, both the competitors spoke about their admiration for each other, and what
their fight at UFC 226 means to both of them. Holloway faces an entirely new challenge in Ortega,
who is known for his slick submission skills, while Brian has to deal with durability and later round
rallies with the current champion.

Holloway talks about achieving success at a young age

Max Holloway has been on a frightening win streak, last dropping a fight to Conor McGregor years
ago. The featherweight champion is just 26, and talked about Brian Ortega’s submission game,
and achieving success at such a young age.

“We’re about to find out, tune in next week”, Holloway said, when asked about Ortega’s submission
game. “This is mixed martial arts guys. I don’t understand people talking about his submission, his
striking, my striking, my submission game… at the end of the day, we’ll find out. That’s the
beautiful thing about the sport. We’ll find out, and next week, you’re going to see (what happens).”

When asked about co – main eventing arguably the biggest card of the year, Max dwelled on what
it means for him to be at this juncture of his career, at a relatively young age.

So it means a lot to me to be able to have this spot on the card. This is like the Super Bowl of the
UFC. The big blockbuster hit that comes out in the summer. This is it.”

While Holloway has been cleaning out the division, Brian Ortega has seen a meteoric rise in the
weight class. Ortega has defeated the likes of Swanson and Edgar leading up to the title fight, and
stressed on the importance of finishing fights.

“It’s very important, because when I go in there, I don’t go in there to score points”, Ortega told us.
“I don’t go in there for a show. I go in there with one objective, and that is to finish my opponent. I
really made a statement when I went into the UFC, and put myself in that mindset that when I’m in
this game, there should be no decisions.

For me, it’s this mindset that I’ve had since a long time ago, and to just keep getting better and
better, and with different opponent, it works differently. Some people can last and survive longer
than others, and others, they just fall quicker. For me, my future rolls on.”

While his path to the UFC title hasn’t been easy, he will be going up against one of the most
durable fighters in the company. Holloway hasn’t been finished in over 6 years, and defeated Jose

Aldo twice, who was considered to be one of the greatest of all times until then. Ortega gave props
to Max for dethroning the former champion, and took nothing away from his efforts.

“Yeah, that was dope man. The guy had twice beaten Jose Aldo. Jose Aldo, I don’t think people
give him too much credit, but he was holding down the featherweight division for about ten years.
He became the champ, and stayed the champ I believe for ten years. And then he met Conor, and
after that people in a way forgot about Aldo. But the guy is a legend himself, so what Max did twice
to him is very impressive.”

The past 12 months have been phenomenal for Brian, who defeated Renato, Swanson and Edgar,
and will be fighting his fourth fight in less than a year next weekend. Talking about his rise in the
UFC, Ortega mentioned that it felt surreal for him to be fighting for the title so quickly.

Yeah, I fought Renato, then went for a little vacation, went to Guam after that. From then on it was
just work, work, work. I got ready for Cub, beat Cub, and then I went to Mexico, saw my family. And
then boom – take the Frankie Edgar fight, and now after the Edgar fight, it’s the Max Holloway
fight.”

Previous article
Interview with Daniel Cormier and Stipe Miocic
Next article
UFC: After few controversial decisions, Stephen Thompson feels he needs to be more aggressive instead of counterpunching