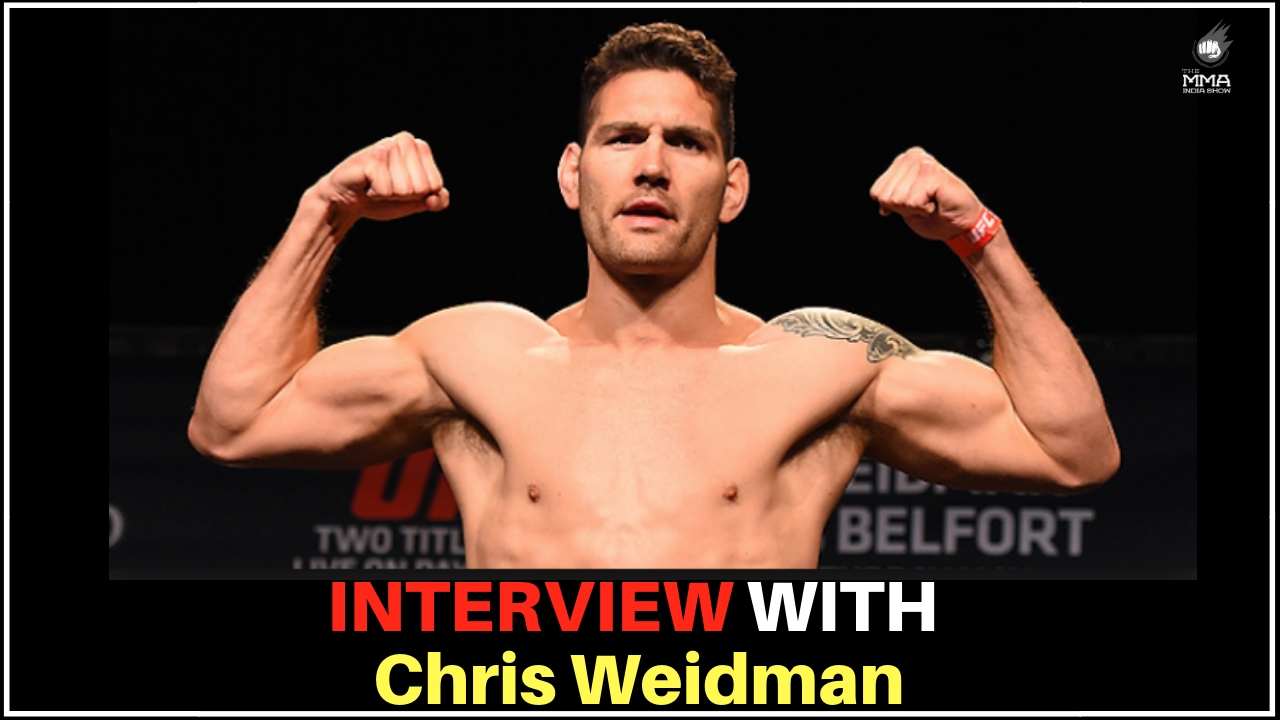 Chris Weidman: “UFC Told Me I Will Be The Replacement For Title Fight With A Win At UFC 230”
It’s almost surreal how quickly things change. Just a couple of years ago, Chris Weidman was on top
of the world. Beating the fighter who is considered pound-for-pound the greatest of all time not
once but twice, Weidman was the talk of the town. The middleweight division had a new sheriff, and
the ‘All-American’ looked destined to rule the 185-pound division for the foreseeable future.

He also secured some impressive wins against former champions and challenges, but things went terribly
wrong once he collided with Luke Rockhold.

And just like that, Weidman was staring at he bright lights, his face a crimson mask, while the reality
dawned on him. He had become the former UFC Middleweight Champion with a loss to Luke
Rockhold.
A lot has transpired since, with Robert Whittaker now taking his seat on the throne. However, this a week was supposed to be Weidman’s opportunity for redemption, but Rockhold had to pull out just
a week prior to the fight, and Jacare Souza stepped in as his late replacement.

“No, definitely – there was no point, I’m in such good shape going into this fight. I wanted to fight
somebody no matter what, not just because it’s Madison Square Garden and New York, because I’ve
done this before; it’s just because I’m in great shape and I want to get to the title fight, and I wasn’t
just going to get a title fight if I don’t beat somebody. So Jacare was a guy that I was offered right
away, and there was no hesitation – it’s a good fight for me.”

Saying that Chris would’ve been at least a little disappointed in not fighting Rockhold this Saturday.
Luke has lost two of his last three fights, and one would have thought he was there for the taking.
However, Weidman said injuries are a part and parcel of the sport, and that he wished Luke a speedy
recovery.

“Yeah, I was very disappointed at first. But at the end of the day, I’ve been there where you get
injured, and you can’t fight, so I felt bad for him, and I hope and pray that he gets better. I know he
had a skin infection, I know it’s pretty serious, so if that doesn’t get better he’ll ruin his career, so I
hope all the best for him.”

“Was told I’ll be the replacement for the title fight with a win” – Weidman
For the former middleweight champion, it is all about climbing the ladder and reaching the Promised
Land once again. Chris told us that UFC had given him their word, that with a win over Jacare, he
would be next in line for the title, or would be the replacement if Gastelum pulls out of his title fight.

“Absolutely, you know. I go out there and do my thing against Jacare, I’ve already been told that if I
get a win here I’ll be the replacement for the title fight. But all that means nothing if I don’t win, so
got to go out there and be the best man I can.”

Chris also gave us his thoughts on the middleweight division, and regarding the fact that there is no
clear number one contender at this stage. The division is one of the most competitive and stacked
divisions in the UFC, and that’s how Weidman wants it to be.

“There’s a lot of talented guys in middleweight- I think it’s one of the better divisions in the UFC, and
I’m extremely competitive, so the better the competition in my weight (division), the better it looks
for me when I become champion, so it’s good.”

Weidman also briefly touched upon the stylistic matchup between himself and Jacare and said that
he had no idea what was going to happen this Saturday inside Madison Square Garden, but that he’s
prepared, and will try to have fun.

“You know, I have no idea man, only God knows what’s going to happen, just – I’m super prepared,
and I can tell you I’m going to be comfortable anywhere the fight goes. I’ve been on the feet with
the best strikers in the world, I’ve been on the ground with the best Brazilian jiu-jitsu guys in the
world, so I’m comfortable everywhere, I’m experienced, and I’m just going to go out there and let
everything hangout, and just have some fun.”