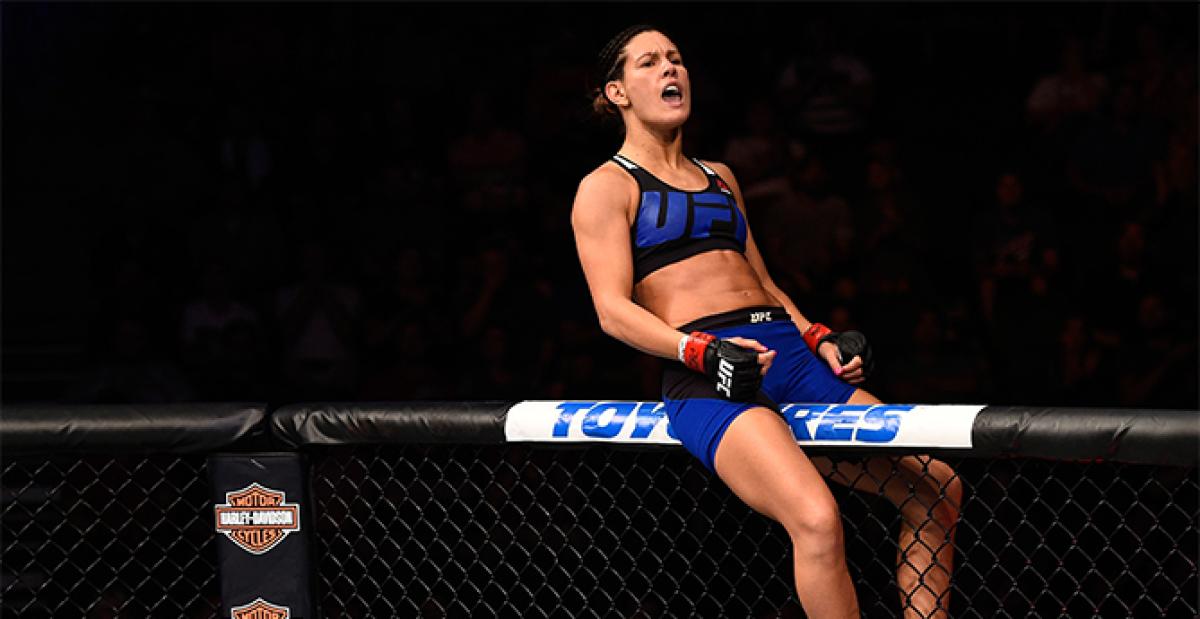 Cortney Casey today stands as one of the most underrated women MMA fighters. She holds a decorated record of 7-4, with wins over the likes of former TUF contestant Randa Markos. The two time fight-of-the-night-awardee, hinted on her social media pages that she’ll be fighting very soon. So before the big announcement, the 30-year-old took some time off to answer questions about her future, personal accolades, controversy surrounding her last fight and more.

1. When you look behind and realize that this is how far you have come, how does it feel?

It feels great. But something we always reinforce with our students is that with hard work and consistency, on and off the mats, your “dreams” will eventually be your life

2. What according to you is your greatest achievement?

I get to do what I love every day. I’m with the people I love, and I’m able to support my family while doing so. So I guess being able to live life the way I like is my biggest achievement.

3. In most of your fights in the UFC, you are the underdog. What is your take on this?

I’m completely ok with being the underdog, I like flying under the radar for the most part. Plus, who doesn’t love an underdog story?!

4. Does the fact that people underestimate you affect you at all?

Not at all! I’ve won 7matches and lost 4. That doesn’t look all that great, but 6 out of the 11 fights have been in the UFC. Four of those fights were against top 10 fighters. So I think my opponents let my record speak louder than my capabilities.

5. In one of your interviews, you stated that you are interested in seeing the women’s Flyweight division in the UFC. Now that the UFC has one, will you be moving up or will you continue at 115?

6. MMA is notoriously known for being a negative sport. Time and again athletes have quit the sport because of the draining negativity the sport has around it. How did you deal with the negativity?

I try my best not to pay attention to a lot of it. I live on Maui, so it’s kind of hard to buy into any drama when I have more important things to devote energy to.

7. Did the backstage politics ever affect you?

I haven’t ever really had backstage drama until Brazil… all I’m gonna say is that “home field” advantage is a real thing.

8. In your last fight you faced former WSOF champion and longtime Pound-for-Pound great Jessica Aguilar. What are your thoughts on the match?

The match went as I expected. I got to implement my game plan and prove I’m an upper tier fighter in the division.

9. Are you happy with your performance?

I’m happy with it, but that doesn’t mean I’m content with it.

10. Your last fight was turned into a no contest by the Texas Department of Licensing and Regulation after an in-competition sample provided by you was found to have an elevated testosterone to epi-testosterone ratio. However, the no contest decision was overturned. How did these series of events affect you?

It had a great effect on my reputation, my family and my gym. It’s not something that just goes away overnight, so I feel like it’s going to take some time before it’s completely in the past.

11. Being accused of doping is considered a serious offense. When you were informed that your fight has been turned into a NC, what was going through your mind?

Honestly, the entire time I was thinking, “WTF… is this really happening?”

12. You have hinted on your social media page that you will soon be announcing a fight. Who is it with? What weight class? Where do you think this fight will take you?

Can’t say who til it’s announced, but it will get a lot of media and social media coverage for sure.

13. In our last interview you stated that you do not have any views on the fighter union. What do you think of it now?

We don’t have a union, but I can say that the UFC & Jeff Novitsky were hundred percent behind me in every move dealing with the TDLR. It gave me a lot of confidence knowing how much they went to bat for me when I needed them.

14. Any message for your fans?

I appreciate every one of you!