Is Jon Jones a cheater? Alexander Gustafsson definitely thinks so

One of the biggest MMA event of the year UFC 232 has been shifted from Las Vegas from the state of Nevada to Los Angeles, California after a very abnormal finding in his drug test forced the Nevada State Athletic Commission not giving Jon Jones a license to compete for this weekend’s mega fight against Alexander Gustafsson. 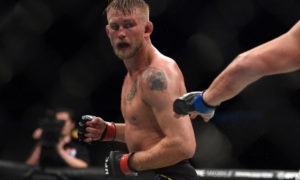 However, Alexander Gustafsson now has made up his mind on Jon Jones and he now believes that Jones is definitely a cheater.

“Yes, I do (believe he’s a cheater),” Gustafsson told reporters, at the UFC 232 pre-fight news conference. “Yes, I do. This guy is not confident. He has to put (expletive) in his body to be confident. That’s all it is.”

“It’s good that you actually believe that a microscopic (picogram) has allowed me to be more confident,” Jones said in response. “I’m glad that you believe that.”

Alexander Gustafsson is not concerned if Jones is taking PEDs or not as he has promised to beat him anyways and there’s nothing that can stop him from winning.