Jack Hermansson finally has an opponent for his fight this weekend taking place at the Apex in Las Vegas. He is fighting rising contender in Marvin Vettori on a week’s short notice.

Jack Hermansson has had a wild ride as far as searching for opponents is concerned. He was initially scheduled to fight Darren Till, but the Liverpudlian got injured and he was replaced by Kevin Holland, who tested positive for covid-19. 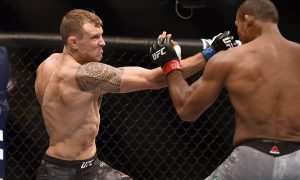 In an interview with BJPenn, Hermansson revealed that he was really looking forward to fighting former title challenger Darren Till and was disappointed when he pulled out as according to him, he could have easily beaten him.

“I was very disappointed especially with all the work that went into this fight camp. I have been specializing on Darren Till,” Hermansson said on Just Scrap Radio on BJPENN.com. “We just broke the game down into small details and worked so hard to perfect everything. Then he is suddenly out. I lose a great opponent and a big fan-favorite. That sucked, we managed to at least get a fight.”

No one wanted to fight Jack Hermansson

Jack Hermansson further revealed that after Darren Till pulled out of the fight, he couldn’t find a suitable opponent and at least five fighters turned down the opportunity to fight him.

“I’m not one of those guys that people are scared of me. But, it might be that people feel they need some time to prepare for me, that four weeks isn’t enough for them. Sometimes the timing in people’s lives isn’t right,” Hermansson explained. “But, for guys ranked below me, I’m right up there and if you want to climb the ranks you have to take these opportunities. Four weeks isn’t that short of notice. I would have loved to see another top guy step up.”

He then further stated that he isn’t interested in fighting low ranked opponent anymore and is targeting the likes of Paulo Costa and Robert Whittaker.

“I don’t like the Till fight too much because that was supposed to be my tune-up fight to show I am the next contender. Now I want that title contender fight,” Hermansson concluded. “It is Robert Whittaker but if Rob isn’t ready, then, Paulo Costa. Those are the only two guys. My next fight should be a contender fight.” (H/T – BJPenn.com)

Who do you guys think wins in the fight between Jack Hermansson and Marvin Vettori? Let us know in the comment section below.