Former WWE superstar Jack Swagger is all set for his second MMA fight against T.J Jones at the Rosemont State Arena in Illinois, the United States at Bellator 221.

However, fans aren’t pleased with Swagger’s choice of the opponent as the 29-year old Mixed Martial Artist from Missouri and a father of six kids has a professional record of 1-1-0 and he hasn’t fought since October of 2017. 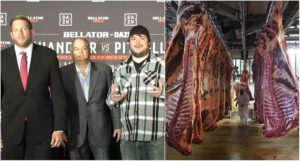 But T.J Jones is excited for the opportunity presented to him and is happy to fight at such a big stage against a well-known wrestling star. T.J Jones is a beef plant worker who wakes up for his job at 4 am in the morning.

Former Bellator and ONE champion and current top UFC welterweight contender Ben Askren took to Twitter and posted a hilarious tweet in regards to Swagger’s opponent.

How TF did a fan sneak into the Bellator Press conference??? pic.twitter.com/9Ghi2WSBfv

“It’s probably one of the most humbling experiences of my life,” Jones told reporters. “You’ve got nothing but world-class champions up here, and then you’ve got Jake. So it’s very cool to be up here with these guys.”

Jack Swagger is coming off of a submission victory against J.W Kiser at Bellator 214 earlier this year.

Previous articleBJ Penn on the verge of setting outright record for worst UFC run with loss this weekend
Next articleJan Blachowicz threatens Luke Rockhold: I will break you!