The 31-year old Surinamese born Dutch fighter has won all 9 of his fights inside the Octagon so far and 8 of them ending in stoppage wins. 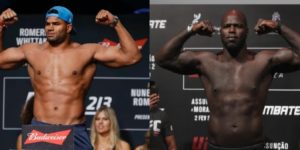 His fight against Overeem is the biggest of his career so far and he said during the media day that he is ready to prove himself against the UFC veteran.

“For me, yes my UFC entrance has been impressive. We worked hard for it and I think I deserve it. I’ve prepared my whole life for this. Fighting Alistair Overeem is a big opportunity for me. It feels like a movie because I used to play with these characters on my Playstation. I saw them as big legends. Now I’m going to face him in real life. I know what I’m up against, I’m ready to do it, it’s my chance and I’m going to take it.”

Although Rozenstruik made his UFC debut a year ago, he has a terrific kickboxing pedigree like Overeem and when asked by the media if that would have give him an advantage or comfort to be playing a similar game, he said that he is ready for whatever Overeem brings to the Octagon.

Even though he has a tough fight ahead of him in Overeem, he already has his eyes set on former UFC title challenger Francis Ngannou.

“Yes, I’ll win this fight, and then I want to fight this big scary guy, Francis Ngannou. As soon as I’ve got that fight, I’m going to go for the title. For me, that’s an exciting fight, and I want that fight for my career. It’s a big challenge.”

When asked how does it feel to headline the first-ever UFC card in less than a year being with the world’s biggest organisation?

“It feels great. I’m living in a movie like I’m dreaming. It’s unreal. Yeah, I like it.”

Who do you guys think wins between Overeem and Rozenstruik?