The boxing match between youtube star Jake Paul and former MMA champion Ben Askren sold around 1.5 Million PPV and has generated over $75 Million in revenue.

In this fight, which took place at the Mercedes Benz Stadium in Atlanta, Georgia, Jake Paul knocked out Ben Askren in under a minute.

If this fight sold 1.5 Million PPV buys as posted by Jake Paul on his Instagram story, it has tied itself up with Mayweather vs Cotto as the 12th largest PPV buys in boxing history. 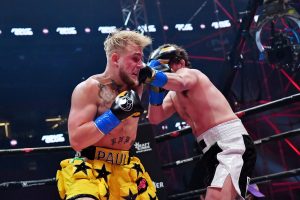 While Jake Paul has improved his professional boxing record to 3-0, he is ultimately targeting a showdown against Conor McGregor, which he believes could happen in less than two years.

“I think we both are on a road to each other,” Paul said about facing McGregor. “He wants another boxing fight. He wants to fight Manny Pacquiao. He would get toasted. He just keeps on taking Ls. So I think him fighting me would not only be his money fight, but it would technically be the easiest challenge, right? Fighting Jake Paul would probably be easier than fighting Manny Pacquiao and it would be just as big.

“I think we’re a lot closer to a Jake Paul-Conor McGregor fight than anyone thinks,” Paul continued. “I think it could happen in the next 24 months.”

Conor McGregor transition into professional boxing briefly back in 2017 when he took on the former five-division world champion Floyd Mayweather. The fight took place at the T-Mobile Arena in Las Vegas and it ended up being the second most purchased PPV fight in the history of the sport. In that fight, Conor McGregor was knocked out in the tenth round.

Meanwhile, Conor McGregor has a rematch bout scheduled against Dustin Poirier at UFC 264 on July 10.

“Conor’s the big name,” Paul said. “He’s a A-list celebrity, and there are very few fighters who are A-list celebrities. So we’ll see what happens. I hope he wins against Dustin, I guess, so that the fight becomes more exciting.” (H/T – BJpenn.com)