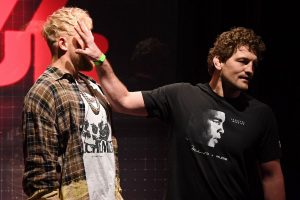 Ben Askren will forfeit purse if he uses MMA moves against Jake Paul?

Heading into this fight, Jake Paul has opened up as the betting favourite over Ben Askren. Many MMA fans believe that the pathway to victory for Ben Askren is to rough up Jake Paul in the clinch.

“I don’t think the fight will last long enough for him to even think about taking me down,” Jake Paul told MMA Junkie in a recent interview. “We just signed the bout agreement days ago. He will lose his purse if he does that. … If he does do something like that, his purse is eliminated in the bout agreement. If he wants to lose all the money for the fight, then sure, go ahead. I am beating him up in wrestling shoes. He’s going to get beat up in wrestling shoes, which I think is hilarious.”

“I don’t think Ben will be able to get near me,” Jake Paul said. “My distance control is 10 times better than his. And if he does, he’s going to get busted up on the inside. That’s one thing we really worked on in this camp is my inside fighting game. He can come in, but he’s going to get cracked. If he wants to hold me, he’s just going to be losing by points.” (H/T – MMAJunkie.com)

Who do you guys think wins in a fight between Jake Paul and Ben Askren? Let us know in the comment section below.

Previous articleRose Namajunas doubles down on Communism comment on Weili Zhang: “Can we really even know what she really believes?”
Next articleDustin Poirier releases statement over donation issue