Jake Paul not interested in MMA fight against Daniel Cormier, wants to box him instead

Jake Paul wants a boxing match against him. The beef between Jake Paul and Daniel Cormier escalated last week when the former UFC champion confronted Jake Paul at the UFC 261 event in Jacksonville, Florida. 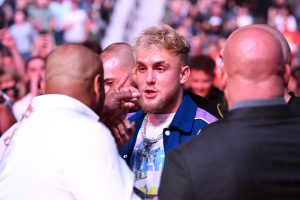 Jake Paul also made it clear as to why he won’t be taking on Cormier’s offer to fight him inside the cage.

“Of course he’s going to challenge me to an MMA fight,” Paul said. “Of course. But I find it funny because he’s challenging me to something I’ve never trained in, and he’s trained boxing and striking and standup and has been in there with Stipe (Miocic), Jon Jones. I mean, he lost those fights, but he’s been in there with the best of the best striking, so why not box? You want to go against me in something that I’ve never trained in before? Of course. That’s like me finding someone off the streets, literally who has never boxed a day in their lives, and being like, ‘OK, come in here, I’m going to challenge him.’

“Of course he’s going to duck the boxing offer. And by the way, there’s way more money in boxing, so we would make more money in a boxing match. Again, I’m a boxer. I never said that I will beat Daniel Cormier in an MMA fight. If he comes and boxes me, I will beat him. Maybe a part of him knows that, which is why it’s funny. Why would he not accept that offer? If we fought, that would be the most amount of money that he will ever make in any of his fights, by far.”

What transpired between Jake Paul and Daniel Cormier at UFC 261?

Jake Paul and Daniel Cormier were caught on camera going off face to face at UFC 261. Now in his recent appearance on Ariel Helwani show, Jake Paul revealed what transpired at UFC 261.

“We get there and of course I’m seated behind the commentators booth and the crowd sees me, starts chanting ‘F*ck Jake Paul, F*ck Jake Paul,’ and DC turns around and sees me and he’s staring right at me and he’s like pissed off and he starts mouthing something to me and I’m looking at him like, ‘OK cool, whatever,’” Paul said.

“I think his goal was to like scare me or intimidate me. He came up all macho and fast and violently and put his finger right in (my) face and I’m like, ‘OK, guy. You’re not scary. You’re 5-foot-8 and chunky, boy.’ I think when he realized like, bro, I’m not intimidated by you at all. We can run it right now. If you want to do something, f*cking do it right now. I basically said, my immediate response was, ‘You put my name into your mouth first.’ Which is a fact. So for him to come up to me like, ‘Keep my name out of your mouth, keep your name out of your mouth,’ and for me to be like, ‘Bro, you talked about me first,’ which is very, very true.” (H/T – MMAJunkie.com)