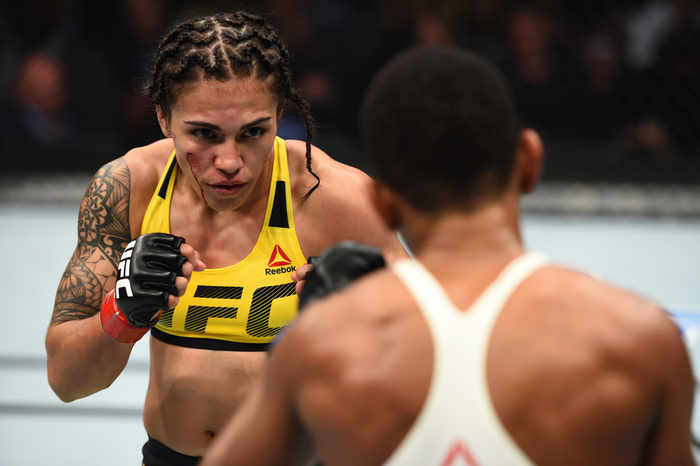 UFC returns to mainland China for the second time this Saturday at the Shenzhen Universiade Sports Centre in Shenzhen, China where UFC strawweight champion Jessica Andrade (20-6-0) will put her title on the line against the rising Chinese MMA star Weili Zhang (19-1-0).

This will be Andrade’s first title defense and she has recently said in an interview that she believes Weili Zhang is a much tougher opponent than Rose Namajunas who she beat earlier this year at UFC 237 via second-round KO. 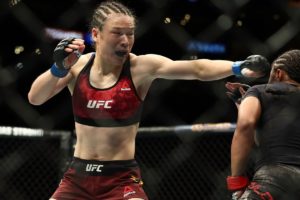 “The Rose fight was way different than this one with Weili Zhang is going to be,” Andrade said to MMA Fighting. “To me, she’s tougher than Rose as an opponent. Rose had some openings that I could fit my game in. Even though she was taller than me and had a longer reach, I was stronger in short distance, my strikes connect better.

“Rose was better in the first round, but that was something we predicted. It was the moment to see what would be her strategy. The kicks were fundamental for me to finish that fight because everyone I threw landed hard. That made Rose slower, weak, scared. She was light in every takedown, it didn’t feel like I was lifting a person. It felt like anything else, a pillow, but not a person. Zhang is tougher both on the feet and with her takedown defense.”

Weili Zhang made her UFC debut a year ago and during that time she has compiled a UFC record of 3-0. In her last fight at UFC 235, she defeated Tecia Torres via unanimous decision. Despite being in the UFC for such a short time, she is no newbie to the sport of MMA. She has competed in 20 Mixed Martial Arts fight.

Despite all of this Jessica Andrade believes that she can win on Saturday night.

“I look at Weili Zhang and see myself,” Andrade said. “She has heavy hands and if we exchange, I want to be better than her. When she fires, I want to be the sniper and her with a small pistol. I like fighting where my opponents are better.

“Everyone says she has good striking, just like Karolina Kowalkiewicz had. Everyone said her [striking] was sharp. I landed one punch and she fell stiff on the floor. Fighting your opponent’s strengths is the key, you frustrate them on what they have best. I believe I’ll come out with a knockout or a submission in the third round. I’m really confident. I’m not underestimating her, it’s going to be a tough fight. You can’t blink.” (H/T – BJPenn.com)