UFC: Jessica Andrade has her sights set on her next opponent if she beats Weili Zhang: Valentina Shevchenko! However, Andrade has her eyes set on something big, a potential double champ status. Especially after flyweight champ Valentina Shevchenko claimed Andrade will have to put in some work before moving up, Andrade has been plotting the idea ever since. Confident on defeating Zhang, Andrade claims she will call out Shevchenko. 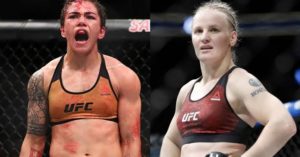 “After I win on Saturday, I will ask to face Valentina,” Andrade told BJPENN.com ahead of her title fight. “I think Shevchenko is one of the best girls in all of the divisions. She’s faced Joanna [Jedrzejczyk], Amanda [Nunes] I believe it would be a great test, so this is what I want, hopefully by the end of the year or beginning of the next year.”

Andrade fought the earlier chunk of her career two classes above at bantamweight which includes fights over former title challengers Raquel Pennington and Liz Carmouche. That being said Andrade can easily fight at flyweight. Andrade claimed her sole purpose to fight Shevchenko is to prove that she’s the best in the world.

“I want to test myself. Valentina is one of the best, so it would be a great test for me,” she explained. “If I’m not able to beat Shevchenko, I’ll at least be able to say that I tested myself and that I gave my best.”

Previous articleBRAVE 25’s Efrain intent on rematching champ Loman: ‘I was injured before’
Next articleWatch: Khabib demands Conor McGregor goes on a 9 or 10 fight winning streak before he is granted a title rematch!