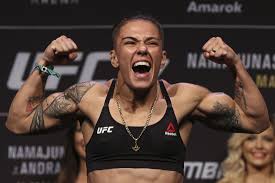 However, Andrade has her eyes set on something big, a potential double champ status. After flyweight champ Valentina Shevchenko claimed Andrade will have to put in some work before moving up, Andrade has been plotting the idea ever since. Andrade claimed that she would like to test herself against the flyweight champ.

“That’s a fight I would really like to have,” Andrade told Brazilian news outlet Portal do Vale Tudo. “I believe that, if I win my next fight, which is my most important fight at the moment, who knows, I might ask for this Shevchenko fight. She’s the best at flyweight, so it would be a cool test for me.

“I want to see what level I’m at, if I have really improved. If I defend my title now, I do want to ask for the chance to fight Valentina and become a champion in two different weight classes.”

Andrade fought the earlier chunk of her career two classes above at bantamweight which includes fights over former title challengers Raquel Pennington and Liz Carmouche. That being said Andrade can easily fight at flyweight.