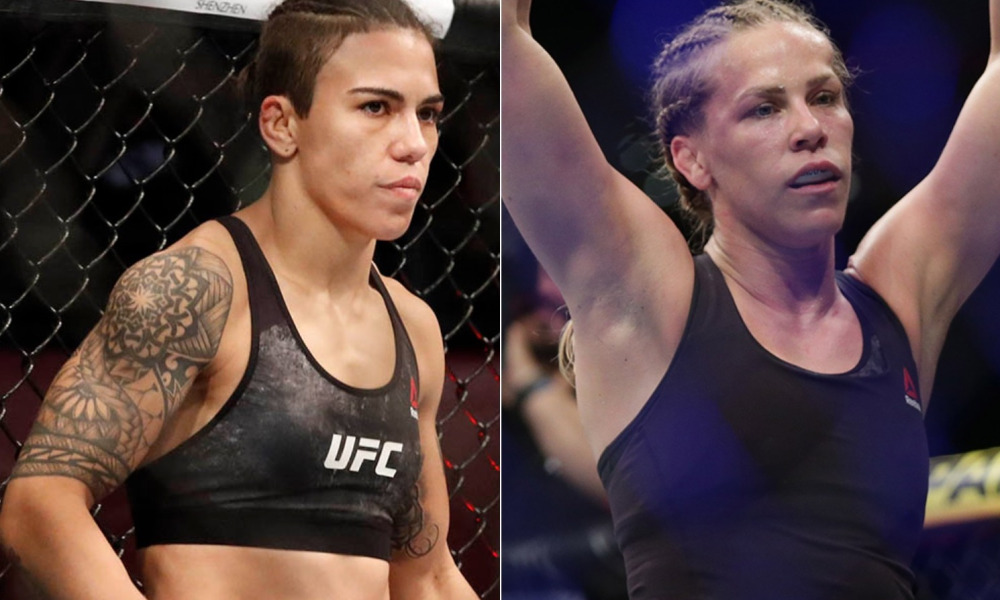 Jessica Andrade (20-8) is set to move to flyweight, her third weight class in the UFC. When she does, she’ll be welcomed by Katlyn Chookagian (14-3).

Andrade moves to flyweight having most recently competed against Rose Namajunas in July at UFC 251 – in a rematch of their UFC 237 bout from May 2019. Unlike the first fight, Namajunas defeated Andrade by split decision. Prior to that loss, Andrade was dethroned by Zhang Weili via a 42-second TKO to snap a four-fight winning streak. In spite of the loss, she’s still number one in the UFC women’s strawweight rankings and in the top five in UFC women’s pound-for-pound rankings.

Most fighters start at a low weight and then aspire to gain weight to become better fighters. However, Andrade has done the opposite, beginning her career in the bantamweight division but later deliberately losing weight to fight in the strawweight division.

The move was clearly a smart one as moving down in weight has jump-started her career, enabling her to leverage her fighting capabilities to their full potential. The former UFC strawweight champion started her career inside the octagon as a bantamweight, where she went 4-3 from 2013 to 2015. “Bate Estaca” then made the drop to strawweight the following year, making her 115lbs debut in June 2016 at UFC 199.

She defeated Jessica Penne by TKO that night, which set her off on a three-fight win streak that led to a failed title challenge against Joanna Jedrzejczyk.

Chookagian (14-3 MMA, 7-3 UFC) is riding high from a unanimous decision win against Antonina Shevchenko in late May. The victory punched Chookagian’s ticket back into the win column after losing to champion Valentina Shevchenko by TKO in February at UFC 247.

No location has been announced for the event at this time. However, with the UFC not applying for October licensure in Nevada prior to Oct. 31, the event is expected to take place on Yas Island, Abu Dhabi. The main event of the card is expected to be a five-round fight between top featherweight contenders Chan Sung Jung and Brian Ortega. Andrade vs. Chookagian will likely take place on the evening’s main card.