Following her most recent victory in the octagon, the former UFC strawweight champion Jessica Andrade is hoping to secure a title rematch with the current champion Zhang Weili. On the main card of Saturday’s UFC 283 pay-per-view in Brazil, Andrade (24-9 MMA, 15-7 UFC) defeated veteran Lauren Murphy (16-5 MMA, 8-5 UFC) in a lopsided, unanimous decision. 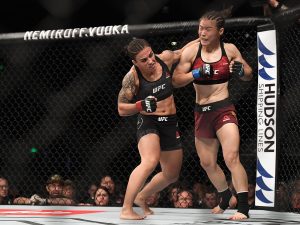 Although Andrade thinks Weili will be the next step, she would be content with a title shot anywhere.

Andrade defeated Murphy at 125 pounds, a weight class higher than the one in which Weili hopes to compete for the championship. Prior to his victory on Saturday, Andrade had defeated top strawweight contender Amanda Lemos via submission in the opening frame of their main event in April. Since losing to Valentina Shevchenko in a championship match at 125 pounds, she has won three straight matches.

The first encounter between Andrade and Weili occurred in Shenzhen, China in 2019, when Andrade, who was the strawweight champion at the time, faced off against Weili to defend her title. She was knocked out in the opening round of the battle, giving Weili his first title reign.