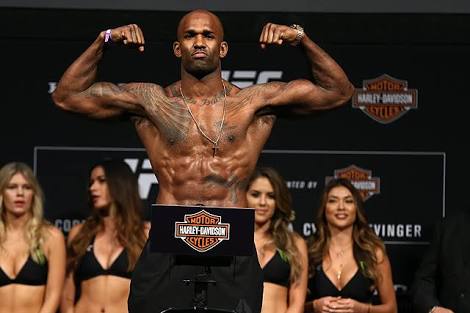 Babajimi Abiola “Jimi” Manuwa is a British MIXED MARTIAL ARTIST  who competes in the Light Heavyweight division of the ULTIMATE FIGHTING CHAMPIONSHIP (UFC). Jimi Manuwa came up short against Volkan at UFC 214, suffering a quick first-round knockout. He thinks that Oezdemir can pull the upset against Daniel Cormier.

“It’s an interesting fight, but on paper DC should win the fight all day long, at the same time, on paper I should have won my fight against Volkan all day long as well.”

“Volkan could shock the world. I wouldn’t put it passed him. At light heavyweight, it only takes one good shot, as we all know. It will be interesting, but I think DC will grind him out and possibly get the win by the third round. I think he should win it by the third, but it’s fighting and it’s hard to predict these things.”

“Again, DC should win, but you can’t rule Volkan out because he’s a hard-hitter. He could shock the world. It’s very interesting.”

“I think he has a lot less pressure going in because he’s come out of nowhere. Being the underdog he doesn’t have to worry about anything else but getting in there and fighting. I think that’s a bonus for him,” he said.

“Honestly, I swear to God, I can’t wait to get in there and rematch him. I’ve been quiet because I don’t like to talk too much, but that’s the one loss that I definitely want to rematch.”

“I think it could happen quite soon depending on what happens with him and DC. That rematch could happen this summer. After my fight in London, I’m going to stay ready. Hopefully he’s injury free and he’ll be ready soon.

“If he doesn’t lose, it could take a little longer, but I definitely want that rematch with him.”

Previous articleFrancis Ngannou thinks Stipe Miocic will be one of the easiest fights of his career
Next articleUFC 220 Embedded: Vlog Series – Episode 4