Jimmy Crute’s leg gave up with few seconds remaining in the first round at UFC 261 following a leg kick from Anthony Smith. As soon as the kick landed, Jimmy’s leg went numb and he tumbled down on the canvas and almost immediately shot for the takedown and successfully executed it. 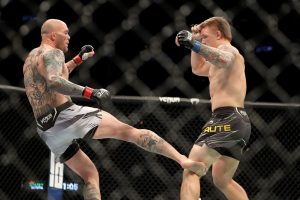 As the break between the round ended, Jimmy Crute stood up and it didn’t look like he would be able to continue and the doctor stopped the contest.

Jimmy Crute: I have blown an ACL

In an interview with Submission Radio, Jimmy Crute revealed that he blew his ACL and is unable to get a CT Scan until he completes the quarantine period in his hotel.

“I think I did a bit of damage to my LCL, I think that’s what they said it looked like when I fell. But it’s just gutting because I didn’t get the opportunity to go out on my own terms. The perineal nerve just gets better by itself, but I feel like I’ve done ligament damage. I’ve blown an ACL, so I sort of know what the ligament damage feels like. But yeah, I’ve got to get a scan. I can’t get a scan until I get out of hotel quarantine, so yeah, it’s frustrating. I’m stuck in here, I don’t know what’s wrong with my knee, I don’t know how long I have to have off. But yeah, we’ll have to wait and see,” Jimmy Crute told Submission Radio (transcript via Jesse Holland of MMAMania.com).

“He hit me with this leg kick that hit me in the perineal nerve and just took out my whole bottom leg. Like, I couldn’t feel. Literally, it just felt like my leg had been dipped in fire, and then it went numb and I couldn’t feel anything in my leg. And then I kept rolling my ankle. But as soon as that happened, I just thought, oh well, I guess we’ll just have to grapple now. I knew the feeling in my leg would come back. With that nerve damage, it only lasts for about a minute or two. So, I knew that if I just grounded him, hopefully by the end of the round I could get some feeling back in my leg and we could go for the second. It took a little bit longer to get the feeling back. I think I literally started walking again normally like 20 seconds after they called the fight. So, it was really frustrating,” Jimmy Crute said.