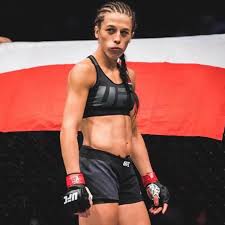 The former UFC strawweight champion Joanna Jedrzejczyk was on the verge of becoming the greatest women’s MMA fighter ever. Though, she was defeated in a shocking upset by Rose ‘Thug’ Namajunas. While she had initially been devastated at her loss, she has now become much more calm and composed. “Joanna violence” has also claimed that she isn’t afraid of losing anymore. 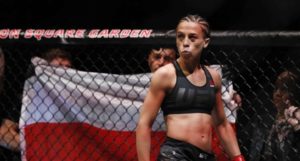 Jedrzejczyk recently made an appearance on this week’s The MMA Hour. She talked about her defeat and how she acknowledged her loss, she also issued a message to Namajuans. Here’s what she had to say:

I have a new challenge and I’m very happy, there is no pressure on me. I’m never nervous about fight week, big fights, because the hard work is done so many weeks, days before the fight. I’m enjoying this, and I look at things differently. I used to say that I want to be undefeated, I wanted to retire undefeated. I don’t care about this anymore. I saw that I love my life more, and fighting is just part of my life. People wanted me to, like, be sad, cry, and hide after I lost. No.

Guys, you have a job, I have a job to do. It’s part of my life. Soon I will stop fighting and I will do something else. I will be a mother, I will have some businesses, I will do some other stuff, and it’s just part of my life. I’m 100 percent in, but let’s not get crazy. That I lost, it’s not the end of the world. For other people it could be, but not for me.

It’s real, and I was afraid of that, And I didn’t know enough, but now I feel like, just deal with it, and I’m not afraid of losing. It’s not going to happen, but I’m not afraid of losing. I want people to see me as a human, that I was not only born for being at the top. I was born for that, but not only for this — I’m real, you can touch me. I’m real, I’m not created. [Dominick Cruz is a] perfect example [of how to deal with a loss].