Joe Rogan, a commentator for the UFC, shared his opinion on Francis Ngannou’s decision to leave the organisation and become a free agent.

Francis Ngannou was let go by the UFC last weekend, it was revealed. The announcement followed a protracted period of negotiations during which the two parties were unable to reach a new agreement.

The decision means that Jon Jones’ match against Ciryl Gane at UFC 285 will now include the crowning of a new UFC heavyweight champion.

Joe Rogan will likely be the contest’s commentator, but that doesn’t mean he’s excessively excited about it. From Ngannou’s UFC debut until his final match against Gane, Rogan has been at his side every step of the way. 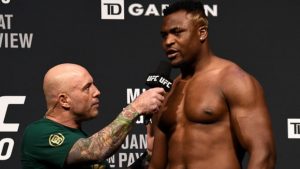 He shared his opinions on “The Predator” quitting the organisation in a recent episode of his podcast.

“I’m so bummed out by this whole thing. I don’t like when a champion leaves,” Rogan said. “I do not like the best guy in the world not being the champion. If Francis wanted to resign, ‘Okay, congratulations sir, you had a great career’. I suspect some of it involved wanting to do boxing as well.

“That’s why I’m mad, I’m mad because I feel like we were deprived of one of the great fights in MMA. One of the most compelling fights in MMA,” Rogan continued. “Doesn’t mean I’m not interested in Ciryl Gane vs. Jon Jones, I’m very interested in that fight.” (Quotes via MMA News)

Ngannou is getting ready to enter the open market, and switching to boxing is probably at the top of his list of priorities.

What do you guys think about this whole situation?